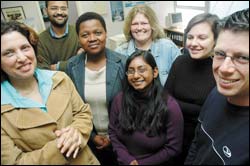 On the job: The DPRU team of (back, from left) Dr Haroon Bhorat and Wendy Lessing, and (front, from left) Bernadette Ontong, Pumza Mapapu, Pranushka Naidoo, Carlene van der Westhuizen and MornÃ© Oosthuizen. Not in the picture is the team's Laura Poswell.

For the Department for International Development (DfID), which manages the UK government's aid to poor countries, the bottom line for its Employment Promotion Programme (EPP) in South Africa couldn't be simpler - create jobs. Many.

According to DfID figures, only 20 million of South Africa's population of 47.2 million people are "economically active". The official unemployment rate hovers around the 28% mark, although there's an "expanded rate" - which includes those who have given up looking for work - of around 41%.

"The labour market doesn't work for nearly half its would-be participants," summed up Hugh Scott, senior private-sector development advisor to the DfID.

That has a spillover into the rest of southern Africa, which relies heavily on South Africa to absorb some of their jobless.

No one knows this better than UCT's Development Policy Research Unit (DPRU). It's their umpteen studies on unemployment and other labour issues in southern Africa that have generated a fair share of the statistics and analysis. (A recent paper from the unit showed that the region is home to nearly half the world's ultra-poor, ie those who live on less than half of one US dollar a day, the standard poverty line.)

So when the DfID launched its South African EPP, it made perfect sense to appoint the DPRU as the lead institution.

The focus of the EPP, part of an umbrella DfID project, Making Labour Markets Work for the Poor, is to spark the formal sector. It's that sector that has the best chance of creating jobs on the scale that's needed, according to the DfID.

And with a grant of UKÂ£1.2-million (around R14-million) from the DfID, it's the job of the DPRU to oil the wheels of the country's labour market.

"We have an intellectual appreciation of the problems that exist," says Associate Professor Haroon Bhorat, director of the DPRU. "We now have the resources to attempt a solution, or send somebody, hopefully the right person or institute, to try and solve it."

So the DPRU will commission or conduct their own studies, build capacity where it's needed, pave the way for cooperation between government departments, and get all stakeholders - government, business and labour - talking.

As someone put it to the unit, it's up to them to "find the gaps, and plug it".

They've already plugged a gaping hole for the country's bargaining councils. These councils provide limited but critical information on wage agreements to the Department of Labour. Lo and behold, decades of these wage agreements - some handwritten - have never been digitised, and so unavailable for easy access. Thanks to the DPRU and the EPP funding, those records have now been transcribed into electronic format.

"So in one blow, we will have gone a significant way toward improving the country's labour market information system," says Bhorat.

Also coming out of the EPP is a talked-about paper in which Professor Halton Cheadle of UCT's Department of Public Law analyses the role of institutions like the labour courts and the Commission for Conciliation, Arbitration and Mediation (CCMA) in understanding post-1994 employment patterns.

"Cheadle's take on this is likely to be controversial," said a recent Business Day article. "But on this, as on other aspects of labour law, he has opened the way to some constructive controversy."

Another project in the pipeline is the Data Corner, an idea long nurtured by Bhorat. With so many requests for statistics on development issues, the DPRU plans to set up a one-stop, online information warehouse, where data can be broken down and "packaged for public consumption".

There's still a lot of work to be done, but the EPP is now well out of the blocks.