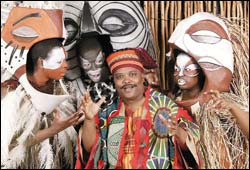 With only a handful of home-grown South African operas to the country's credit, the world premiÃ©re of Masque on Friday saw the launch of a significant treasure, reflecting the country's layered and rich cultural seams.

Written and conducted by Hans Huyssen and directed by UCT senior lecturer (drama) Geoff Hyland, the pioneering work breaks with Western operatic tradition, melding a vibrant cross of Baroque, symphonic and Africa sounds, with dance, to produce something uniquely African.

Briefly, Masque plays on the metaphor of masks, striking African masks created by alumnus Illka Louw, recently returned from Wales where she completed a postgraduate course in set design.

The opera begins with the griot, the traditional Malian storyteller, inviting the audience into the magical world of performance. He conjures up a busy station in a city where we encounter Sam, a blind man begging. The scene moves to the creation of the world when God made the five elements of stone, iron, water, fire and air. But each time mankind becomes proud, God sends a succession of balancing forces: blindness, sleep, sorrow and death, after which the masks take their names and personas.

The scene moves to a museum where the masks are housed as lifeless artefacts. When they come to life after the griot touches them, dispelling the curse that has cast them into lifeless figures, the masks decide to follow prophecy by escaping and seeking a way home.

"It's a big beast," Hyland said of the opera. Developing and staging a new opera of this complexity is costly. The two-act opera incorporates three diverse orchestras and a huge cast and chorus. The logistics have been formidable.

But in liberating the art form from its predominantly Western parentage, the production offers a composite that is textured and layered to reflect its African wellspring, and with more than a few surprises in its execution and composition. Hyland uses the word "magical" several times to describe the fusion of Western and African traditions.

Huyssen's music (incorporating UCT's African music students) is dense and complex and the singers (including UCT opera students), have been asked to infuse their singing with traditional African voice techniques, something Hyland expects will "raise eyebrows" among the purists.

Not that he's fazed by that.

"The opera needed a director dedicated to the idea that operatic form can move and change and benefit South Africa," he explains.

It's his first opera and the production is a complete breakaway for Hyland, who made a name for himself for his direction with Sandra Temmingh of Federico Garcia Lorca's Blood Wedding in 1988. But this has been a year of nudging the creative frontiers.

"I have the greatest respect for tradition in the fine and performing arts, shaped by time and many thousands of hands," Hyland says. "I have a high regard for forms that have been passed down to us. And yet in the practice of my own art, I confess a personal inclination for experiment, for pushing the boundaries.

Nothing like this has been done before, he notes.

"It's a tremendously important piece of work." Opera is an art form that has fascinated and drawn him for many years.

"At times during the process of birthing this new work I've felt overwhelmed by its delicate and multifaceted intricacy."

Renowned baritone Fikile Mvinjelwa plays the griot, and UCT's Professor Angelo Gobbato plays an academic who examines and comments on the masks housed in the museum.

(Masque is on at Artscape on November 1 at 19h00, November 5 at 20h00, with the finalÃ© on November at 20h00. Bookings can be made at Computicket. It is presented by the UCT Opera School and Cape Town Opera, with sponsorship from a number of organisations, including the Mellon Foundation, the National Lotteries, Arts and Culture in Society, Prohelvetia, and the Swiss Development Corporation.)