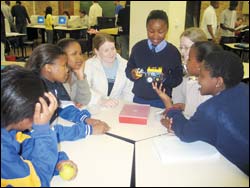 Scientists at work: These high school pupils are designing and programming LEGO robots, part of an international initiative to get kids interested in science and technology. (This is an EBE outreach initiative.)

LEGO is not really what you'd expect postgraduate students to be tinkering with in the mechanical engineering design lab down in the Menzies Building.

But it's happening. Every Tuesday and Thursday afternoon, more than 70 grades 9 and 10 pupils and their UCT postgraduate student mentors gather to take their play to a more sophisticated dimension.

And in between the fun and games, these disadvantaged students are building and programming robots, the result of a unique partnership between FIRST, a company established by American inventor and entrepreneur Dean Kamen, and the Danish family-owned educational toy company, LEGO.

Profiled by the New York Times as "a new kind of hero for American youth" Kamen (who holds over 150 US and foreign patents) says he dreams of a world "where young people dream of becoming science and technology heroes".

Kamen took his dream beyond rhetoric. He founded FIRST (For Inspiration and Recognition of Science and Technology) to motivate kids to explore new applications of science and technology.

Some years ago, FIRST teamed up with LEGO to form the FIRST LEGO League, where teams of high schoolers design, build and program robots using LEGO MINDSTORMS.

Until October 27, you can see UCT's league hard at work down in the lab. The place teems with activity as the pupils (from Grassdale High, Sithembele Matiso Secondary, Ikamva Youth, Islamia College and COSAT) spend two hours in teams, building and programming their robots.

After eight weeks of practice, these teams will compete at a tournament to be held at the MTNScienCentre on October 29 (all are welcome to attend this day-long event). The students will be given a set problem and asked to design a solution, using LEGO and robotics.

This year's theme is Ocean Odyssey Challenge. Around the world, over middle-school students from 30 countries are involved in similar exercises, applying creativity and science to studying and protecting the world's oceans.

Teams will be measured not only on their technical design and programming but also on equally important skills: team work and research, especially research that concerns the use and abuse of the world's oceans.

UCT's programme coordinator, Will Scarbrough, a master's student, recently signed a contract to work with FIRST LEGO League in the United States.

He's thrilled with the way the programme is bringing science and technology alive for these students, under the tutelage of postgraduate volunteers.

"Cross-generational mentorship is not a modern concept," he said. "But we've had a wonderful response from the students. They just love working with the kids, who all want to be involved with mechatronics."

(The Canal Walk event is one of two South African tournaments planned. The other takes place in Gauteng.)

The UCT FIRST LEGO League is sponsored by The Shuttleworth Foundation's HIP2B2 campaign.