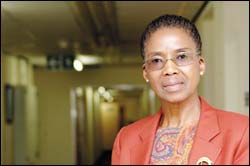 Filling the spaces: Prof Julia Mekwa says that the gap in research on nursing intervention in South Africa needs attention.

As with most professions, research is the lifeblood of nursing practice.

First of all, it obviously feeds into what nurses do and don't do when providing health care. And, of course, it helps to beef up the quality of the care they deliver.

But, as Professor Julia Mekwa, head of the Division of Nursing and Midwifery at UCT, explained recently in her inaugural lecture, Intervention - A Missing Link in the Chain, there have always been a few question marks hanging over research in the field. Firstly, there's the perennial issue on whether in fact nurses should be dallying in research at all.

Says Mekwa: "People normally don't associate nursing with research, and yet, at the same, research is an absolute need for nursing because it informs the practice of nursing."

Which probably explains why, in South Africa, studies by nurses and nursing students at universities took a while to get off the ground. Mekwa's own check showed that between 1969 and 1976, 54 postgraduate projects were completed, not bad given the many constraints at the time, says Mekwa.

Things picked up considerably between 1979 and 1989. In 1982, leaders in the field got together at Rand Afrikaans University (RAU) to think-tank research priorities and develop a blueprint for a national research strategy.

That in no time led to the establishment of the South African Nursing Association (SANA) research unit in 1983, which dovetailed nicely with the launch of the National Research Foundation (NRF), as it is now known, in the same year. This was followed by the appointment of the first nursing representative on the Human Sciences Research Council (HSRC) in 1984, and the founding of the South African Society of Nursing Researchers a few years later.

So, it appeared, research into nursing was getting done. But what kind of research? A bit of everything, it turned out.

"Because of the nature of nursing, nurses are seen as generalists, jacks of all trades," says Mekwa. "The unfortunate part is that if you become a jack of all trade, there's a possibility that you might become a master of none."

Research was scattered far and wide, says Mekwa. Which meant that some areas were receiving scant attention, like clinical interventions, the missing link of her title. Clinical nursing interventions are actions or treatments initiated by nurses for which they, and not the doctors, for example, are accountable.

The lion's share of studies in nursing, Mekwa found, was on other topics. Such as - the biggies - models of and the experiences and attitudes around nursing practice.

In comparison, nursing interventions made up but a small piece of the research pie.

It remains a gaping hole that begs attention.