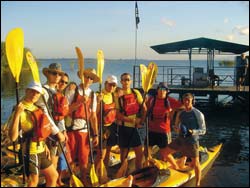 Mellow yellow: The group of eight (including six UCT students) at the start of the marathon kayaking expedition from the bottom to the top of Lake Malawi.

It was one deadline these six UCT students enjoyed - and even surpassed - despite some tough logistics.

In July they completed a marathon journey under the umbrella of their company, My African Dream, becoming the first group to paddle the western coast of Lake Malawi, bottom to top, in under a month - all 800km of its ruggedly beautiful and unpredictable shoreline.

However, the there and back by car, via Zimbabwe, completely overtook the stretch they kayaked. And conditions meant some heavy wear on shock absorbers.

Planning to paddle 26km a day, starting at Mangochi in Malawi and ending in Mantema in Tanzania, they found they were easily putting in 35km to 40km.

"We did plan to paddle with the wind," said team member Charles Dennison. The strategy paid off.

Wary of the notorious wee beasties in the water, Flanagan, the group leader, said they came across four hippos on the very first day out. Their hearts sank. Fortunately, these were the only hippos they saw during the entire trip. And they didn't come home with any crocodile skin sandals either.

Conditions on the lake, the third largest of the Great Rift Valley lakes, were varied, with surprisingly large swells - between 2.5m and 3m - enough to interest a surfer, but causing havoc for kayakers.

"Unlike the sea, the waves come out of nowhere. It's like being in a washing machine," Dennison recalls.

Group dynamics on the journey could have been very tricky.

"Eight people is a lot on one trip, especially weighted so heavily towards men," Dennison commented.

The sole woman was Frances Loots, a University of Stellenbosch student, and daughter of their sponsor.

"Our manners went out of the window- we didn't hold back," Flanagan added.

Camping along the banks of the lake, they stirred huge interest amount the locals, their bright yellow sponsored Paddel-Yak craft, courtesy of Johan Loots, drawing many admirers.

Setting up camp on the shores, usually around 15h30, brought an immediate crowd, sometimes 140-strong, who would arrive, settle and watch, fascinated by their doings.

"It was like a scene from Big Brother," Flanagan joked.

They quickly learned to arrange their kayaks in a square around the camp, providing a measure of privacy, allowing them to get on with the business of setting up camp and preparing food. They followed a solid diet of oats, peanut butter on Pro-Vita, and tuna pasta.

"We took way too much food," Dennison comments.

Their impressions of Malawi? A poor but peaceful country, which, although caught in a drought, lives up to the slogan: Malawi, the warm heart of Africa.

All in all, the group is pleased with the way things panned out. There were grumblings about exorbitant taxes at the border crossing into Zimbabwe, and fuel in that country. Once, when they did run out of petrol in the dead of night, they managed to secure 20 litres. Asking price? A trifling R35 a litre.

And this before Hurricane Katrina.