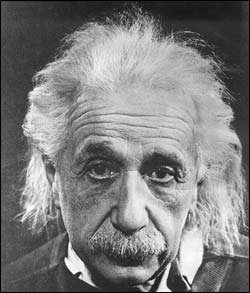 It was 100 hundred years ago that Albert Einstein, the former patent clerk and a man described as "brimming with paradoxes", wrote five landmark papers.

Experts agree that each was worthy of a Nobel Prize in physics.

To mark Einstein's Miraculous Year, the physics department is hosting a symposium that every senior physics student or devotee should attend.

The symposium takes place this Wednesday, September 14, in Lecture Room B, RW James Building, from 14h00 to 16h45. The programme includes lectures, a play featuring UCT physics fundis (intriguingly titled Subtle, But Not Malicious), and a panel discussion, What Have We Learned?

The five papers that Einstein submitted between March 17 and September 27, 1905, to the Annalen der Physik, and that have radically changed the face of physics, will be discussed at this journal symposium.

Afterwards, panellists will answer questions from the floor. But, if none is forthcoming, attendees can expect to be quizzed on the concepts of simultaneity, space travel, time dilation, cosmic rainbow, twin paradox, Doppler shift and aberration.

The lectures will also discuss the impact of Einstein's discoveries on modern science and the economy, and also weave in some historical reminiscences of Einstein's life.

Please e-mail parsons@science.uct.ac.za if you would like to attend this reflection on Einstein's in anno mirabile.