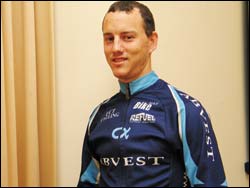 Thanks to a new bike and additional hours of training, cyclist William Robinson is pulling away from the peloton.

"I have been putting in the extra mileage, about 6 000km between November and February, and my new bike is about 3kg lighter. This means I can climb hills faster and in cycling this makes a big difference."

It shows. In June, Robinson won the gold medal in the Elite category (23 years and over) in a 125km road race held near Stellenbosch, and he finished fourth overall in a 40km time trial staged along the Wellington to Malmesbury road. And in July, he came fifth (out of 282 cyclists) in the 100km Pick 'n Pay Rotary Knysna Cycle Tour. He was also the star UCT performer at the recent Sassu Games.

One such challenge will be the five-day stage race through the Garden Route and Klein Karoo, the Tour de Eden.

"It's the second biggest tour in the country and I enjoy competing against people and pushing myself," said Robinson.

As the UCT team leader, Robinson is also fortunate to have a pack of five riders working to help him win races.

"It's nice to have the support," he added.

Support also comes in the form of asset management company, Abvest, whose generous sponsorship covers the team's expenses when they compete in the major tours. They also pay the entry fees for their league races and have supplied the team's kit.

Robinson says without this money the team simply wouldn't be able to take part. Besides his cycling commitments, Robinson also acts as chairman of the UCT athletics club, and his running fitness helps his cycling, especially when it comes to tackling those never-ending hills.

"With athletics you average a higher heart rate and this helps builds your fitness and endurance for the long road bike races."

Let's hope Robinson's stamina keeps him ahead of the pack.