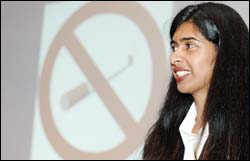 Lighting a fire: Dr Anamika Jithoo and others from the Lung Institute made it clear that the folks from Ravensmead and Uitsig communities are going to have to kick their smoking habits soon.

Very few people light up as often as the residents of Ravensmead and Uitsig, the primarily-coloured neighbourhoods just outside Parow.

Martha Duister is a case in point. The 64-year old from Ravensmead has been smoking since she was just 12, and isn't too sure if she can kick the habit anytime soon.

She's well aware of the dangers of smoking, more so after a talk by researchers from the UCT Lung Institute to those two communities in Uitsig last week. Fun though the afternoon may have been - velvet-voiced entertainer Alvon "Mr Showbiz" Collison had the 300-strong crowd eating out of his hand - the institute was also there to hammer home a very serious message: the heavy-smoking Ravensmead and Uitsig residents are going to have to cut way, way back.

The smoking habits of the Ravensmead and Uitsig community are providing new clues to the prevalence of disease pandemics such as chronic bronchitis, emphysema and tuberculosis (TB), with important implications for health policymakers around the world.

The Lung Institute, Stellenbosch University and the City of Cape Town collaborated in a study called the Lung Health Survey in 2002. They found that this community has among the highest smoking rates in the developing world - 59% among men and 43% among women.

It also has one of the highest TB rates in the world.

As a follow-up to the Lung Health Survey, the institute's Dr Anamika Jithoo and Professor Eric Bateman have been investigating the prevalence of Chronic Obstructive Pulmonary Disease (COPD) in a study for the international Burden of Obstructive Lung Disease (Bold) Initiative.

More commonly known as emphysema and chronic bronchitis, COPD is a lung disease caused predominantly by smoking. In developing countries, there are additional risk factors such as occupational dust exposure, prior TB infection and dagga smoking.

The Bold study is part of a global initiative that has seen similar information gathered from countries as diverse as Iceland and the United States.

This study points to a very high prevalence of COPD in the Ravensmead/Uitsig community, with preliminary results showing that approximately one in five women and one in three men are at risk of developing the disease. This is a much higher risk than previously thought.

In addition, the Lung Health Survey found that smokers have a higher risk of contracting TB, providing a possible clue to why this disease shows no sign of abating in the Western Cape. The Western and Northern Cape regions have the highest smoking rates in the country.

COPD, which is often under-diagnosed and therefore not properly treated, causes damage to lung tissue that can lead to a progressive and disabling illness, particularly among over-35s, characterised by shortness of breath, wheezing and coughing.

One of the objectives of the study is to highlight the risks of smoking and to raise awareness of COPD, which is projected to become the third biggest killer in the world by the year 2020 (it currently ranks sixth).

Further results from this study, which has been the focus of Jithoo's PhD work for the past five years, will be analysed over a six-month period in London with one of the world's top epidemiologists, Professor Peter Burney at Kings College, University of London. Bateman has also been asked to serve on a steering committee for a global alliance against chronic respiratory disease that aims to address COPD as one of its priorities.

At their Ravensmead presentation, the researchers worked hard to get their message across. Bateman, Jithoo and colleague Dr Rod Dawson pointed out some scary statistics and images of lungs (and smokers) nearing collapse.

"Firstly and most importantly, we advise people to stop smoking," said Jithoo. "This will stop the COPD from getting any worse."

Martha Duister was paying attention. "It's not that easy to give up," she says.