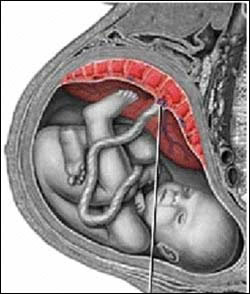 The placenta in cross-section at the umbilical cord.

Covering diverse topics such as the diagnosis of TB meningitis and fetal alcohol syndrome screening, a bumper crop of six students will be graduating later this month with master's degrees in biomedical engineering. Four of these students will do so with distinction.

"All of these students were examined by international examiners and, since a distinction is a fairly rare occurrence, this is a very positive development," said Kit Vaughan, professor of biomedical engineering.

Halberstadt's project, titled Pattern Recognition in the Detection of Tuberculosis Meningitis from Brain Computed Tomography Scans, developed an algorithm for the detection of a sign associated with Tuberculosis Meningitis (TBM) in children. Together with Dr Savvas Andronikou, who recently completed a PhD in radiology on this topic, Halberstadt investigated the presence of hyperdensity in hardcopy CT films by the reconstruction of CT numbers from the digitised films, and showed that hyperdensity is associated with TBM. The end result was the delineation of hyperdense areas of the brain, which aids radiologists in the diagnosis of TBM. The algorithms that have been developed will, in future, be incorporated into a computer-aided diagnosis tool for use by radiologists.

In Keevey's thesis, Finite Element Tool for Modeling Stent Development to Aid Stent Design, the various components of stents - including guidewire, inner lumen, balloon, stent and crimping machine - were all modeled using finite element analysis. An arterial stent is a small metal device that is inserted into a blood vessel artery to treat blockages. A compressed form of the stent is inserted over a deflated balloon that is then directed to its intended location using a catheter. The balloon is then inflated, and the stent expands to its final form. When the balloon catheter is removed, the stent remains behind keeping the artery open or patent. One of the problems confronting manufacturers of stents is that during deployment the stent can slip off the balloon. Keevey conducted a series of simulation experiments in which the balloon-plus-stent was deployed, and these provided various insights, including the potential mechanisms for the stent shooting off.

As part of his thesis, Investigating the Effect of Size on Gait Using Bipedal Robot, Karbanee designed and built a passive (ie gravity-driven) bipedal robot that was tested on an inclined walkway. A series of experiments, based on a computer simulation model of the robot, were also conducted. By varying the length of the robot's legs, as well as the slope of the incline, the dynamics of stable bipedal gait were explored. The results were compared to the gait of both passive and active (ie powered) bipedal robots published in literature, and also young human infants during the neuromaturation phase of gait acquisition.

The Use of a Neural Network to Recognise Placental Insufficiency from Blood Flow Velocity Waveforms in the Umbilical Cord was the title of Alhamud's thesis. The umbilical artery provides oxygen and nutrients to the foetus while is it still in the mother's womb. Present-day obstetric decision-making is based on measuring the umbilical arterial blood flow velocity waveforms from one site of the cord. There is an ongoing debate on the predictive value of Doppler measurements in the evaluation of the foetal condition. The aim of this thesis was to investigate the use of a neural network to recognise blood flow waveform shape patterns associated with placental insufficiency. Alhamud concluded that measurements of the umbilical blood flow velocity waveform at both ends of the cord, together with umbilical radius, represent a significant indicator in identifying the true foetal condition.

Rex Grobbelaar and Devin Bosanquet are the other two students who will also graduate with their master's in biomedical engineering.