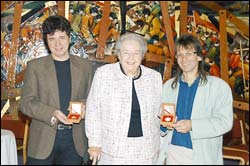 Two of UCT's A-rated scientists, Professors Igor Barashenkov and Frank Brombacher, are recipients of the prestigious Harry Oppenheimer Fellowship Awards for 2004, allowing them to pursue their research interests in Europe.

The awards, initiated by the Harry Oppenheimer Trust in 2001, are aimed at supporting individuals who are able to make significant contributions to South African public life.

Barashenkov, originally from Dubna, Russia, has been attached to UCT's Department of Mathematics and Applied Mathematics since 1992 and is recognised by his peers as a world leader in the study of solitons. Solitons are localised bunches of energy that propagate with their shapes and speeds unchanged. These studies have revolutionised a range of areas of mathematics and physics and also have strong practical application in fibre-optic telecommunications. Barashenkov will use the fellowship to visit the physics group at Germany's University of Bayreuth.

Trained as a molecular biologist in bacterial genetics at the University of Freiburg, Brombacher obtained his PhD in 1989 as a member of the group of Nobel Laureate Professor Georges Koehler at the Max-Planck Institute for Immunobiology, Germany. He moved to UCT in 1998 and is currently director of the Medical Research Council Unit on Immunology of Infectious Disease and a member of the University's Institute of Infectious Disease and Molecular Medicine.

For the past seven years he has devoted his research efforts to establishing experimental models to investigate host-protective mechanisms in diseases such as sleeping sickness, bilharzia, tuberculosis and leishmaniasis, four of the top ten diseases prioritised by the World Health Organisation.

Brombacher, who will use the proceeds of the fellowship to spend eight months at the Zurich-based Swiss Federal Institute of Technology, said: "I am driven by the question 'Why?' with lots to uncover and explore. I sincerely hope that a better understanding of our 'Nature' may contribute to further developments of mankind, to sustainable living, stability and happiness for all beings."