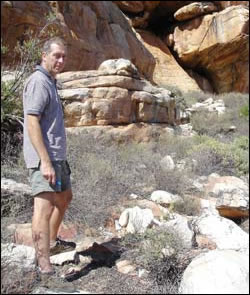 Exploring the past: Prof Mike Meadows out in the field near a dassie home.

Here's a jaw-dropper: the closest living relative of the African elephant is, believe it or not, the rock dassie. All 55cm and 4.5 kilos, give a gram or two, of it.

Here's another stunner: the selfsame dassie stores a treasure of clues to what the climate was like in the past - as far back as years, in fact - in its toilet.

Climate is all about cycles and patterns. It was towards the end of the 19th century that geologists first found proof that, for the past few million years at least, the planet's climate was characterised by a series of lengthy ice ages (glacials) sandwiching shorter, warmer periods such as the current one (interglacials). Each cycle is said to last tens of thousands of years, the last ice age drawing to a close some or so years ago.

The question for UCT biogeographer Professor Mike Meadows, though, is where exactly on that vast timeline of glacials and interglacials does Earth's - and, specifically for his research, the Western Cape's - climate fit at the precise moment? And, of course, whether global warming has thrown that trusted cycle for a loop.

Coming up with answers has been a perennial headache for scientists. Partly because of the occasional variations that would crop up in the middle of a cycle - the sudden dry winters, for instance.

"What we're really trying to do is distinguish between variation in climate and change in climate," says Meadows. "And the only way to know that is to look back in time. Without reference to the past, you can't measure where we are and certainly not where we're going."

In trying to draw that timeline of the world's climate - past, present and future - scientists are hamstrung by a lack of information. Local records don't go back further than the 1700s, for instance, when the first rainfall measures were taken.

Instead, scientists have to rely on a handful of "proxy measures", such as foraminifera (forams for short), tiny marine creatures whose geochemical makeup provide tips to past climate conditions. The oldest foram fossils, for example, date back hundreds of millions of years.

A more common measure - the one that Meadows is partial to - is the microscopic pollen grain. Like forams, pollen grains fossilise well, keeping their size and shape despite the passing of time.

And as each flower or plant has its own unique pollen, it's easy to connect the dots and see, once the age of the pollen has been determined by radiocarbon dating, what vegetation was found in a particular place at a particular time. From the vegetation profile scientists can then extrapolate the climate of that period.

Pollen is well preserved in sediment, particularly in soil found in wetlands or ocean beds. "The only problem", says Meadows, "is that South Africa has relatively few wetlands." That leaves huge blanks in the puzzle scientists are trying to put together.

Some 20 years ago, though, the University of the Free State's Professor Louis Scott, who specialises in pollen morphology and regularly collaborates with Meadows, came up with a novel solution. While on sabbatical with the Desert Research Lab in Tucson, Arizona, in 1979/1980, he found that researchers there were extracting their pollen from the dung of pack rats.

"I thought that because it's a method so useful for drier countries," says Scott, "that we must have something similar here." A flash of inspiration later, and he had arrived at the rock dassie, around since Africa was just an island continent and found these days in rocky areas all around South Africa.

Colonies of dassies stay in the same caves and rock shelters for generations and, conveniently for researchers like Meadows and Scott, share the same toilet facilities. "They poo and pee in the same place for a long, long time," is how Meadows carefully explained it at his recent inaugural lecture, Back to the Future: a geographer's view of the changing southern African environment, which his young children attended.

And in the dassies' middens (dung heaps, some piled five or six metres high) are the telltale pollen grains. These include remnants from both the plants that the dassies ate, and free-floating pollen that got stuck onto the gooey mass over time.

The pollen grains, along with some other sources, tell some interesting tales.

For one, years ago the sea-level in the Western Cape was about 130m below what it is now, at around the time when global ice sheets were at their maximum extent. Southern Africa and other stretches of the continent were not only colder then, but also parched. In the Western Cape, however, the cold fronts that bring its winter rain were more frequent then and the climate was correspondingly wetter. More recent changes are associated increasingly with human actions and these are also evident in the pollen archives, such as colonial farming that triggered widespread vegetation disturbance across the region.

"Climate is a changeable entity," says Meadows. "And that brings us back to the question if what we're seeing now is just variation or trend."

If it is a trend, the questions are then whether it's out of synch with what has gone before and what should be happening about now (a steady lapse into the next ice age). There's some consensus that climate patterns are changing, and that it will lead to more extreme events, like droughts and floods.

But many models, even those designed to predict the possible distribution of vegetation in the future, are all at sea. "We don't know how plants are going to be able to cope with the changing environments," says Meadows.

Only time - and maybe a few dassies again - will tell.