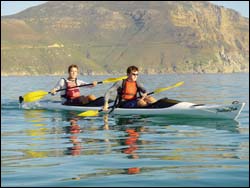 Hard yards: Charles Denison (back) and Kevin Flanagan put in some practice at sea in their PaddelYak-sponsored craft.

Scots doctor and missionary Dr David Livingstone described it as a "lake of stars" when he saw Lake Malawi's glittering surface for the first time in 1859. Now six intrepid UCT students hope to become the first to kayak the western coast of the Great Rift Valley's southern-most lake in just over a month - all 800km of its convoluted shoreline.

They're currently zipping up eight months of planning - in between a stretched academic load - to become the first group to kayak from the mouth to the source of Africa's third-largest inland water mass in just over a month, moving from south to north with prevailing winds.

The group will start in Mangochi (Malawi) and end in Mantema (Tanzania).

Kevin Flanagan (team leader), Charles Denison, Nicholas Carkeek, Richard Fraser, Benjamin van Breda and Vincent Dickson met during a gap year in the United Kingdom. The bonds endured. The team's senior, Rob Dyer (28), is a veteran paddler who navigated the Mozambique coast in a kayak, and a professional film producer. His insights will be invaluable.

Add to the mix one young woman and the dynamics of the all-male group teeter. Frances Loots, a 19-year old Stellenbosch commerce student, is the daughter of their very generous main sponsor, Johan Loots of PaddelYak. His request was that she accompany the group if the chance arose.

"We discussed it, met Frances over a braai and decided it would be good for the team."

Though they have elected Flanagan as leader, they admit they are all headstrong individuals. But three sponsored sessions with a sport psychologist have orientated them firmly. They've set a common goal, written a mission statement and learned some important truths about team dynamics and individualism.

The trip has been put together under the umbrella of their company, expedition seekers My African Dream (MAD).

"The dream came about as an idea on a recent trip through Mozambique, Malawi and Zimbabwe using public transport," Dennison says. He and Flanagan found the excursion into the hinterland physically and mentally challenging. But they wanted more.

"On visiting Lake Malawi we decided to push the limits even further and quickly realised that the lake offered far more opportunities for adventurous travellers."

Back in Cape Town they forged the Malawi expedition. After exhaustive research and planning, they are pragmatic about the conditions they expect to encounter.

The winds, especially the seasonal south easterly (called the Merwa) and weather on the lake can be unpredictable. During the 30 or so days of the trip they will thus paddle on a rotation system; six paddling at one time while the remaining two drive the support vehicles to the next stop.

"This rotation system will allow us to cover large distances at a fast rate without having to rest every few days," Flanagan explains.

They will employ the full gamut of navigational aids: maps and satellite photos, compass, radio and GPS systems.

"One of the main aims is to professionally log the route by using Global Positioning Systems," Flanagan notes. "The entire route will be analysed, mapped and recorded. Information on the conditions, wildlife, scenery and terrain will be documented and fed to tourism bodies and other expeditions to the area."

Their carefully worked-out plan has covered it all. But the line at the bottom of their letterhead really has the answer: "One life. Live it."