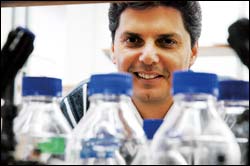 The world after petrol

Richard Heinberg, sometimes controversial futures analyst and author, will deliver a lecture at UCT on May 4 at 13h00 in Menzies 10. Heinberg believes the world is entering an ear of rapidly-declining petroleum production, with a fall in natural gas production following soon after. He foresees severe impacts for society. His book, Limits to Growth, jolted the world when it was first published in 1972. It demonstrated that unchecked growth on finite resources was leading the planet towards ecological "overshoot". The sequel, Beyond Limits, says we have already overshot the planet's carrying capacity. Heinberg will be a guest of the South African New Economics Network (Sane).

Burnt out? Need a relaxing reflexology session? Free? Come along to the Department of Communication and Development office at Welgelegen, at the top of Chapel Road, (which runs between Tugwell and Kilindini residences) to enjoy this therapeutic form of massage. This service is highly recommended, but please do book by e-mailing Gaylh@iafrica.com immediately. The dates and times are: Thursday, April 28, between 13h00 and 16h00; Wednesday, May 5, from 13h00 to 16h00; and Wednesday, May 18, from 13h00 to 16h00. Further dates to follow.

Fulbrighter gets to heart of epidemic

Dr Faadiel Essop will be the first to admit that you won't often spot him in a research laboratory these days - his job as director of finance and administration at the Hatter Institute for Cardiology Research put paid to that. But come July, a lab is about the only place you will find him. As recent winner of a Fulbright South African Researcher Scholarship, Essop will be heading for the technology-flush facilities of longtime collaborator Prof Heinrich Taegtmeyer at the University of Texas-Houston in the United States. For his six months alongside Taegtmeyer, a world authority on cardiac metabolism, Essop will begin to test a hypothesis that the heart's increased use of fats as fuel curbs its ability to produce energy for its work. While it's accepted that fatty diets - soon to be a global phenomenon, according to the World Health Organisation - and other factors trigger heart failure, researchers now also believe that it leads to other side-effects, says Essop. As a new Fulbrighter, it's a chance for him to get his hands lab-dirty again, as well as follow in the footsteps of UCT mentor Prof Lionel Opie, director of the Hatter institute. "There's a rich tradition of research into cardiac metabolism here," Essop says, "and I now have the opportunity to build on that.