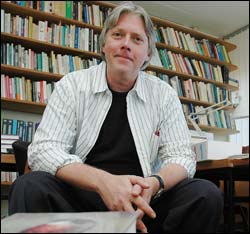 Making a difference: Prof David Chidester is the winner of this year's Alan Pifer award.

This accolade is made each year to UCT scholars whose work contribute to the advancement and welfare of South Africa's disadvantaged groups.

With that criterion in mind, Chidester's work has had a major impact in a number of areas, noted Dean of the Faculty of Humanities, Professor Paula Ensor, in her nomination. Firstly, she pointed to his longstanding role in the Religion Education Project of the Institute for Comparative Religion in Southern Africa (ICRSA). Here he had a hand in drafting public policy for religion in education, designed to promote tolerance and respect, and to protect learners from discrimination on the basis of religion.

And how better to glue a divided nation together than looking - and prompting others to look as well - to the country's leading lights for inspiration and the way forward. Which is exactly what Chidester did in two lauded books, Nelson Mandela: From Freedom to the Future and South Africa's Nobel Laureates: Peace, Literature and Science, both of which he co-edited. Ensor described Nelson Mandela, which has been published in the US and the UK with Spanish, Dutch and Greek translations in the pipeline, as a foundational document for thinking about South African politics and society.

Over the past years, Chidester has served as special advisor to the minister of education, was named a distinguished fellow in the HSRC's above-mentioned Social Cohesion and Integration Research Programme, and was also co-director of the International Human Rights Exchange. The American Academy of Religion has twice named him as winner of its Award for Excellence in Religious Studies, in 1990 and 1997.