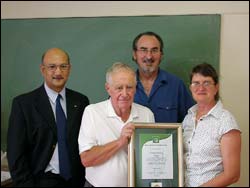 Valuable contribution: Dr David Richardson (second from left) was honoured for his work in grazing-system dynamics. He was congratulated by (from left) the Dean of Science, Prof Daya Reddy; HOD of the mathematics and applied mathematics department, Assoc Prof Christopher Gilmour; and the Grassland Society of South Africa's Dr Nicky Allsopp.

The Department of Mathematics and Applied Mathematics' Dr David Richardson might be considered by some to be a very late bloomer.

Having completed his second PhD last year (he graduated in December), this at the age of 75, the septuagenarian has gone on to earn another honour, one not usually bestowed on a mathematician.

The Grassland Society of South Africa (GSSA) has awarded him a medal and certificate recognising his doctoral achievements.

His work develops a comprehensive mechanistic model that simulates, over one year, the effects of rain, stocking rate and range condition on the productivity of forage and livestock in the Succulent Karoo of Namaqualand. The thesis explores how this short-term model can be used to model ecosystems in the much longer term, that is, over 100 years.