UCT is at the forefront of porphyria research 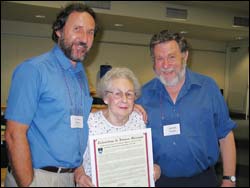 Milestones: (From left) Prof Peter Meissner, his mother Doreen and Prof Ralph Kirsch. Doreen received a citation at the conference, a tribute to her dedication to porphyria patients over four decades.

South Africa, and particularly the porphyria laboratories within the UCT/MRC Liver Centre, remains at the forefront of porphyria research in the world, this according to Professor Peter Meissner, chair of the 2005 Porphyrins and Porphyrias conference, held at the breakwater campus last week.

Meissner has been active in the field since around 1982 and is a founding member of the Institute of Infectious Disease and Molecular Medicine.

Porphyria refers to a group of diseases in which, as a result of a metabolic defect, there is an overproduction of substances known as porphyrins. In most cases, the defect is genetic, caused by a faulty enzyme that can't handle the normal metabolism of porphyrins, with a resultant overproduction.

This condition is fairly widespread in South Africa (with an estimated 30 000 persons carrying the trait), the gene having been linked to a Dutch immigrant who came to South Africa aboard The China in 1688.

The disease presents in one of two ways: as photosensitive lesions on the skin, and by acute neurological episodes characterised by abdominal pain and sometimes paralysis. In the old days, half the patients became paralysed for up to 18 months. These days this is rare and, with treatment, patients usually recover in less than a week.

In South Africa the condition was first documented in 1939 in a UCT student publication by the late Professor Lennox Eales. Eales' legacy lives on in the name of the university's porphyria laboratories.

Co-chair and head of the Porphyria Clinic, Professor Richard Hift, said he was especially gratified to see that the conference had attracted a significant proportion of the porphyria experts from around the world.

"There is plenty of consensus on the way forward," he remarked.

The gathering dedicated the proceedings as a festschrift to liver research doyen, Prof Ralph Kirsch, in his retirement year, recognising his scientific, educative and leadership contributions.

"We believe it entirely appropriate that such a distinguished contribution by a South African scientist is recognised and that our conference is something he will remember fondly," Meissner said.

He added that Kirsch's role in the "ongoing porphyria story" was a fine example of what could be achieved when scientific research and clinical care merged, advancing both science and the art of medicine.

"Ralph guided us to understand the pathogenesis of the acute attack of porphyria and the molecular genetics of porphyria in South Africa."

The conference also provided another milestone, marking an altogether fortuitous genetic connection, that of a mother and son in the porphyria unit. Doreen Meissner retired last month, marking 40 years' service in the unit. She joined the university in 1964 as a field nurse, tracking down and counselling families affected by porphyria. Her shoes will be hard to fill, Kirsch says.

Doreen remembers the days when her son worked in Eales' department during his school holidays, performing various menial tasks. Working part-time to ensure her family didn't miss her, Doreen trekked to various corners of the Peninsula and beyond to track down patients, putting them in touch with the unit and the therapy they needed.

Now retired - she has a framed and signed citation to prove it - life for the self-taught genetics nurse will revolve around a cottage at Stanford together with her husband.