Research is the great attractor 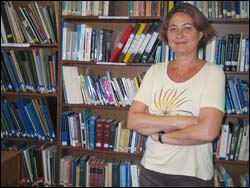 It's quite something when your entry in the Millennium Edition of Who's Who in the World is longer than Bill Clinton's.

But UCT's new Chair of Astronomy, Professor ReneÃ© Kraan-Korteweg, finds it amusing rather than significant. She's a pragmatist after all; anyone who works part-time while completing her studies and raises three children across three continents (following her postings) knows what it means to have their orbit tilted.

Successor to Emeritus Distinguished Professor Brian Warner, who retired at the end of last year, Kraan-Korteweg's office is spartan, still without any personal stamp - her personal belongings are on a container between Mexico and South Africa.

She's quite at home on the multicultural campus in the lee of the mountain. Having lived and worked in Holland, Switzerland, France, Chile and Mexico, she speaks six languages, including German, Dutch and Spanish.

Moving a family and household around the globe has its challenges. Fortunately Pieter Kraan is a software communication consultant; a permanent land base is less important than good infrastructure.

"It's important that he has an airport nearby," Kraan-Korteweg says.

In 1997 she took a post at the University of Guanajuato, Mexico, to help build up a newly-founded astronomy department, the first of its kind in a state university outside Mexico City, as well as undergraduate physics/astrophysics and graduate astrophysics programmes.

It was hard work, with scant funding, but by the time the undergraduate programme was feeding a burgeoning postgraduate cohort, she was ready to pack her bags for Cape Town. As gratifying as it was, nursing a new astrophysics department left her with little time for research - too little.

Now she has a chance to rekindle the flame lit by her father. 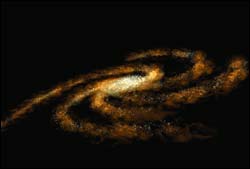 Out there: Nasa's breathtaking image of the Milky Way.

"He was a navigator and familiar with the sky. He took astronomy classes at the university and I used to sneak in with him."

Shrugging off the mandatory needlework and cooking classes girls were expected to take in Switzerland, the young ReneÃ© Korteweg took extra maths and physics classes with the boys. The field she finds herself in now is vast, absorbing, often frustrating; new data bringing yet more questions.

For the past 25 years Kraan-Korteweg has studied the large-scale distribution of galaxies in the nearby Universe.

Her emphasis shifted to the tantalisingly-named Zone of Avoidance (ZOA), the name coined by American astronomer Edwin Hubble. Broadly speaking, the ZOA is a band within the plane of the Milky Way through which very few extragalactic objects can be seen at visible wavelengths because of interstellar dust.

Simply put, the dust absorbs the light and obscures the view. So while it may look like there are no galaxies near the Milky Way plane, astronomers now know otherwise, having made observations in various other bands of the electromagnetic spectrum.

Astronomers later discovered large-scale streaming motions that pointed towards the Zone of Avoidance, telling them the area was far from empty. In fact the streaming motion was so pronounced that it led to the prediction of a Great Attractor, an extended mass concentration, the centre and bulk of which are hidden behind the Milky Way, approximately 150 million light years away. Hypothetically, it is so large (its proposed mass amounts to tens of thousands of galaxies) that it seems to be affecting the motions of many nearby galaxies.

Kraan-Korteweg initiated various multi-wavelength observational programmes, particularly in the southern sky where the Cosmic Microwave Background radiation and the Great Attractor are located. Her work was so successful that she was soon joined by other astronomers and students.

With Fairall and Woudt, Kraan-Korteweg has been working on a detailed analysis of the Norma cluster at the core of the Great Attractor. She has initiated systematic deep optical searches for galaxies on existing sky survey plates, which now cover about 120 x 20 degrees of the southern Milky Way. In 1994 she brought together various Zone of Avoidance researchers at an international conference in Paris, followed by gatherings in Guanajuato in 2000 and in Cape Town (she was co-chair) last year.

Her CV lists a deck of publications and research endeavours, including two bilateral cooperations between Mexico and France, as well as professional and committee memberships and an impressive list of NASA Astrophysics Data System (ADS) citations.

There are big questions that still keep astronomers awake at night. Though observations suggest a Universe that has been expanding ever since the Big Bang, no-one understands why. Is it dark energy pushing matter outwards?

"Seventy percent of the universe is made up of dark energy, but we don't know what it is," Kraan-Korteweg says. "It will require a giant leap in our thinking."

Infused with energy of her own, Kraan-Korteweg is upbeat about opportunities in this far-flung corner of the Universe.

"There are so many things happening here," she enthuses, listing SALT and South Africa's bid for the Square Kilometre Array (SKA). All will bring new research opportunities and ample data for doctoral and master's theses. And she's especially complimentary about the National Astrophysics and Space Science Programme, a collaboration between the country's tertiary institutions to train a new generation of astrophysicists, directed by UCT's Associate Professor Peter Dunsby.