From Utah to Cape Town 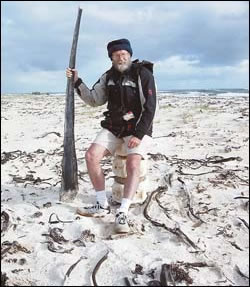 Thure Cerling is hard to pin down. It's not intentional. He has extremely broad and technical research interests. It's easier to talk about his forays to the Antarctic to collect ice samples or to the Rift Valley. This is terra firma, conversationally speaking.

There is one word perhaps that manages to corral his thinking: isotopes. Ask about using stable isotopes as natural tracers in scouting out the origins of certain elephant ivory and the conversation may take a sharp right - he also uses isotopes to study processes at or near the earth's surface. Which brings him to his investigations into the dietary changes taking place in mammalian lineages over millions of years.

It's not his first visit to South Africa - he's popped in and out between transits to East Africa. But the view from the Beattie Building has clearly beguiled him. Do all UCT academics look onto Devil's Peak?

Elected to membership of the National Academy of Sciences in 2001, Cerling is also a Fellow of the American Association for the Advancement of Science and of the Geological Society of America. He has been a visiting Professor at the Scripps Institute of Oceanography, Yale University, the University of Lausanne in Switzerland, and the California Institute of Technology.

Cerling has spent months in the Turkana Basin in East Africa and other Rift Valley sites studying the geology of Old World palaeoanthropological sites.

"I study modern soils, lakes and ecosystems in an effort to apply isotope systematics to understand the evolution of ecosystems, monsoons and the atmosphere over geological time scales."

By using isotopes produced by cosmic rays in situ in rocks, Cerling's research group also studies the landscape's evolution over the past one million years. There are also many modern applications of isotopic investigation, as he explains.

"Isotopes are signals or residue clues. For example, we can tell what proportion of grass herbivores ate in the past by studying the isotopes in the fossilised remains. Oxygen and nitrogen isotopes can tell you about water and stress levels, and they are recorded in animal hair. You can also use isotopes to track which region ivory came from, or where cotton was grown."

Last year he was called to comment on the US Energy Department's design for burying nuclear waste at Yucca Mountain near Las Vegas. The board questioned the spacing of waste containers in the tunnel, saying the heat conducted would accelerate a number of chemical reactions, including oxidation and leading to pitting and perforations.

He believes South Africa must get to grips with alternative energy sources. Energy resources in Africa ("all of Africa") will be a major concern of the next decade. What will South Africa decide to do? "Nuclear, coal, oil, gas, wind: each has its own problems and issues."

And on the issue of South Africa's nuclear waste, he says: "The country fortunately has the benefit of learning from other countries."