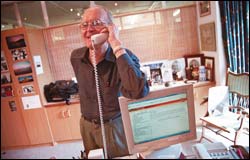 On the line: Emer Prof Lionel Opie has to use many sources to make sure the online version of his book Drugs for the Heart holds the latest information.

By the time the latest edition of Emeritus Professor Lionel Opie's Drugs for the Heart - a must-have for cardiologists around the world - hit the bookstands a few weeks back, the volume was already dated.

And it's not just because Opie, director of the Hatter Institute for Cardiology Research at UCT, had dotted his last i's and crossed his last t's way back in March (the text has been with the graphic designers and layout people and the printers since then). More to the point, there have been at least three major international conferences where the latest research findings in the subject have been showcased. None of these studies are reflected in this the sixth edition of the book, of course.

Well, not in the hard copy anyway. But Opie and his publishers, WB Saunders Company, have not been caught napping. To make sure that doctors, especially those hooked on palmtops and laptops, have the most cutting-edge data at their fingertips, Drugs for the Heart - described as the definitive pocket-sized practitioner's guide to cardiovascular drug therapy - has an online version at www.opiedrugs.com.

With the wealth of information currently available on the subject, doctors expect more of their publications, explains Opie. "They don't want to know what happened three years ago," he says. "They want to know what is happening in the field now."

So at least twice a year, after the conference of the American College of Cardiology in March, and then after the meetings of the European Society of Cardiology in September and the American Heart Association in November, Opie sits down and inputs the information on the website (you can buy the book and get automatic access to the web version, or you can simply purchase access to the online edition).

There are many other sources he has to keep track of as well. It helps that he is an associate editor of Circulation, the journal of the American Heart Association that he and others consider the best of its kind in the world, which means he's in the loop for other news on groundbreaking studies.

Help is also forthcoming from co-author Dr Bernard Gersh, a Groote Schuur-trained cardiologist, UCT graduate and former Rhodes scholar, who serves as a cardiologist at the high-tech Mayo Clinic in the United States. Gersh, explains Opie, is close to the epicentre of the "new cardiology", from where he can evaluate treatment by novel devices for heart failure such as the automatic defibrillator (one keeps US vice-president Dick Cheney's heart a-ticking), left ventricular pacing and externally-implanted heart assist devices.

It's a Herculean task to know, among the glut available, where and what information to source, says Opie. "You have to always keep in mind what it is that's likely to be relevant to doctors looking after patients."

The online version is all fine and well for the medical techies, but what about those practitioners who don't have the luxury of palmtops or can't, as some actually do, wheel their laptops around with them on hospital trolleys? Well, they too can take heart, Opie promises.

It may need a bigger pocket than the spartan first volume that saw the light of day in 1981, but it goes without saying that all the current web updates are just manna for a seventh edition.