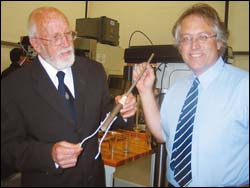 Saving limbs: Prof Brooks Haywood (left), former head of orthopaedics at Groote Schuur Hospital, with Dr George Vicatos of UCT's Department of Mechanical Engineering at the launch of Isiqu Orthopaedics. Prof Cyril O'Connor, dean of the Faculty of Engineering and the Built Environment also attended the launch and wished the company all the best with their future endeavours.

Heavily involved in biomedical research, Vicatos will be able to produce a number of complicated prosthetic parts, such as knees, elbows, shoulders and hips, much faster and with greater precision thanks to Isiqu's (meaning "complete body" in Xhosa) sophisticated machinery.

"Because they are locally designed and manufactured, these custom-made implants will be far more affordable than the equivalent imported products, which will give many cancer patients, whose only other option is amputation, a second chance," Vicatos explained.

Vicatos, who is responsible for coming up with the scientific drawings for the prosthetic parts and tools, works together with Len Watkins, a principal technical officer in mechanical engineering, who machines all the pieces, and Vincent Pallotti Hospital surgeon and part-time at Groote Schuur Hospital, Dr Keith Hosking, who resects the cancerous bone and replaces it with the customised implants.

In addition, Isiqu collaborates with surgeons all over the country and will be inviting them to contribute their ideas regarding orthopaedic prostheses leading to the production of unique South African designs. Isiqu also works in conjunction with researchers from Free State Technikon and the Council for Scientific and Industrial Research (CSIR).

Vicatos pointed out that the modular design of the components allows the surgeon, using simple tools such as a spanner (sterilised of course), to assemble the correct length of the prosthesis inside the operating theatre but outside of the patient.

"They are designed to be simple and to make the surgeon's job easier. While some parts are exceptionally difficult to manufacture, others can be standardised. Together with Isiqu we are hoping to produce the components in various sizes and options in advance so patients need not wait. We also hope to export our components in the near future."

Research on new designs is ongoing and Vicatos, who collaborates with various UCT departments including physics, biomedical and materials engineering, currently has five students actively involved in this project.