Close call in the Leslie 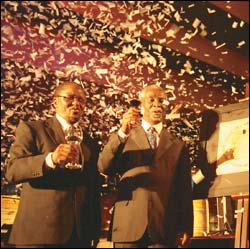 Special effects rain down on the President (right) and VC.

The Department of Communication and Development's Murray Steyn is not a trigger happy kind of guy.

Mostly, he's a family man with sound values; someone who wouldn't hurt a bar fly. Not someone who deserves the nickname Bazooka Bill.

He's been called many things, he says, in his varied career as a marketing man. One colleague even calls him the "Can Do" man.

"He can do anything. There's simply nothing he can't do," she says, recalling the time he got students to package very large onions for the launch of the chancellor's fund-raising campaign, the Chancellor's Challenge 175. The students poked the brown, earthy things with their fingers. They sniffed them suspiciously. These were gifts? Had there been some mistake?

It turned out they were Amaryllis bulbs. Afterwards, they blossomed red in gardens everywhere. Like knowledge and learning.

But this story goes back to last Thursday evening. Steyn was persuaded to stand on a small platform during a presidential dinner for Thabo Mbeki in the Leslie Building. He had to raise a bazooka gun to his shoulder and fire it in the direction of the main guest table. It wasn't an actual bazooka, he corrects, but a plastic flutter gun. It looks like a bazooka and fires like a bazooka. But instead of rockets, it discharges confetti, paper bits and pieces, for a real party effect.

As the festive bits flutter down on the guests, they emit cries of wonder.

Steyn says he had a few flutters himself. Is this what he got a BA degree for? Should he wear a Teflon vest? What would he actually do if the presidential guards thought he was up to no good? How fast could he get off the platform? Who would pay his bail money? And, would anyone remember to bring the bazookas home afterwards?

"No sudden movements, Murray!" his colleagues tittered as they gathered around the tea trolley the day before. The news had done the rounds - as quick as a tracer bullet. The nickname was tied up almost as fast. Even the traffic control guys were overcome by mirth at the idea of big Murray on a platform with a bazooka, pointed in the president's direction.

There wasn't one gun. There were two of the things; in case the first one didn't go off. Of course the whole thing was cleared with presidential security. Even they were overcome by mirth. Whoever says: "Hey guys, I'm going to point this at the president if that's okay with you"?

Nonetheless, Steyn said he had a nervous moment making eye contact with the bodyguards as he nestled the barrel against his chin.

Who looked away first he wouldn't tell.

When the time came, he squeezed the trigger slowly. A drop of perspiration fell. Someone coughed. A truck reversed across Library Road. The bazooka fired. It made a "whump!" sound that startled some guests. Confetti fluttered about and it all looked very nice.

Bazooka Bill packed away the weapons in his violin cases and breathed easily again. All in a night's work.