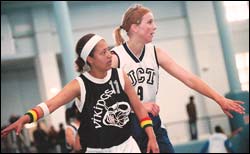 The disappointment was evident on the face of Slindile "Slee" Mayeza.

And Mayeza, captain of the women's basketball second team, had good reason for being a little cut up. Her side had after all beaten Montana Vikings, their rivals in the finals of the Western Cape Basketball Association (WCBA) second league competition, by 45-41 in the first of the three matches that make up the season finale. But Vikings swept the second and third matches, and UCT's advantage and title hopes evaporated as they went down 38-58 and 35-58 respectively.

According to the Viking coach, his side was caught off-guard in the first match by the lanky players just recently included in the UCT team. But his side quickly got over the shock, he says, and used their greater speed to good effect in the final two clashes.

UCT should bear some of the blame, though. They created more than enough scoring opportunities, but were let down time after time by poor marksmanship. "We missed too many baskets," concedes Mayeza.

But there is a silver lining in the cloud that gathered over the team after the match. "We made it to the final, and that was our goal at the beginning of the season," notes the captain, pointing out that her team finished rock bottom of the league last year, but had turned itself around in 2004.

That surely is a victory in itself.