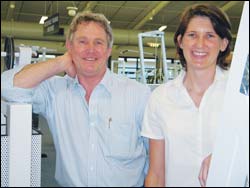 Dr Karen Sharwood of the UCT/MRC Unit for Exercise Science and Sport Medicine (Essm) is facilitating the formation of a South African charter to recognise the importance of physical activity among children, especially at school. The charter is based on a similar initiative by Dr Robbie Parker, head of the New Children's Hospital in Westmead, Australia, and is an attempt to gather local stakeholders in a national drive to counteract growing obesity among South African children.

Parker, who was among the group that initiated the charter in Australia, visited South Africa this month to co-convene a workshop on the document, providing guidance and insight into the Australian experience. The workshop was part of the Third Annual Discovery Vitality Fitness Convention and was attended by more than 80 key role players, including government , NGOs, sports and recreation bodies, and academics.

The need for such a charter arose from increasing concern among parents and school teachers about how much exercise children should be doing at school. Though Essm is driving the initiative, it is not owned by any one organisation. Sharwood and Professors Tim Noakes and Vicki Lambert form the core group that will facilitate the process.

"And we do want input from everyone," Sharwood says.

The charter will provide a philosophical framework to support and promote physical activity among children, and comes in the wake of decreasing activity levels among the youth and a concomitant rise in obesity.

A South African National Food Consumption Survey reports that one in 13 children between ages one and nine in formal urban areas is overweight. Worldwide childhood obesity has reached epidemic proportions, with 155 million school-age children around the world now obese or overweight. The prevalence of obesity among children aged three to nine years in developing countries ranges between 7% to 10%.

According to Sharwood, preliminary data from South Africa suggests that the prevalence of inactivity or sedentary living is on a par with most developed countries, partly due to urbanisation. South African children are also more inactive because schools lack safe sporting facilities or offer insufficient physical activity.

For example, published data from Wits' Birth to Twenty study (http://www.wits.ac.za/birthto20/), shows that less than a third (30.6%) of black South African children are offered physical education at school. It also reveals that more than 40% of South African youth (grades four to five) do not get enough vigorous exercise. These changes to school curricula and activity levels are evident in the rising rates of childhood obesity.

Attitudes to life-long physical activity are determined in part by both the pupils' participation in sport at school and, this is sure to alarm many women, by maternal attitudes to exercise.

"It's clear that there is a need for nationwide intervention at school level to curb this exponential rise in sedentary behaviour later on in life," Sharwood adds.

There are many social and economic barriers, but the charter should be recognised for what it is; a stepping stone. South Africa does face many problems; children are not safe in playgrounds, many schools are ill equipped, most do not have teachers trained in physical education. The list goes on. Sharwood concedes money will have to be spent to get the nation's youth up and running, so to speak. But there are simple ways of going about it; rudimentary equipment like balls and skipping ropes are adequate and promote activity that doesn't need manicured sports fields or level tarmac.

Interestingly, the articles in the charter include guidelines to protect children against the flipside of the coin: over-rigorous physical activity resulting in physical and psychological abuse, excessive or inappropriate training techniques, or even performance-enhancing drugs and exploitation for commercial gain.

Sharwood is confident the charter will provide a sustainable approach to getting children physical. "It is not an overnight process," she said. "It's a stepping stone. Nor is the charter a panacea. It will provide structured guidelines to the direction in which we wish to move."

She also believes the day is not far off when schools will see the advent of Heart Foundation-accredited tuck shops. But that is another charter.

Dr Karen Sharwood, who obtained her PhD at the end of last year, was the main investigator in the cardiovascular control experiment Mark Shuttleworth conducted in space in 2002. This work was recently published in the South African Medical Journal. Sharwood is now working as the research project manager at Essm with their industry partners, including Discovery Health.