Things you never knew you didn't know about UCT 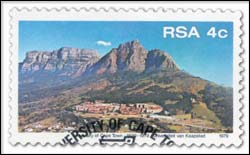 Stamp of class: The stamp commemorating UCT's 150th birthday in 1979.

One can but speculate. It was the early 1920s, and UCT was looking to fill its vacant English chair.

Among the candidates for the job was South African-born JRR Tolkien, then based at Oxford but in search of a teaching post. UCT decided that Tolkien was indeed the man for the job, but the process was snail-paced - commissioners had interviewed him in England on UCT's behalf and posted reports to the university via languid mail ship. By the time UCT had got the good news to Tolkien by return mail, he had already accepted a post at Leeds University. Bad news for UCT, but perhaps not for the cult fans of the books that would come later (The Hobbit was released in 1937, The Lord of the Rings over the mid-1950s) and the hordes lured to his texts by three attention-grabbing films.

Millions may well have had to do without Gandalf the White, Frodo Baggins, Viggo Mortensen and The Precious had Tolkien moved to Cape Town and had he been denied the creative fillip that England provided for the stories.

Another top-flight littÃ©rateur who almost graced UCT's teaching podiums was Samuel Beckett. In the 1930s, some two decades before Waiting for Godot shot him to international fame, Beckett applied for a post as a lecturer in Italian at UCT. The hapless Beckett was soon out of the running, as the university was set on appointing someone who spoke Italian as a first language. Beckett's application was rejected, and UCT got its Italian national. Unfortunately, this lecturer - one Edoardo Bizzarri, trained in Rome - spent most of the war years off campus. He was thrown into a South African prisoner-of-war camp, as a national of an enemy state, as soon as the Second World War broke out.

Another luminary who sought employment at UCT was a young Jan Smuts, who in the 1890s applied for a post to the law faculty of UCT's first incarnation, the South African College (SAC), which was then beginning to dabble with post-matric studies. Smuts didn't get the job, and the rest, as they say, is history.

The Characters. UCT has had its share of offbeat residents over the years. Academic pioneering aside, Ben Beinart, a professor of Roman law who first came to the university in 1950, surely earned a special place in the university's annals for his 1970s riposte to an irate student who had charged into his office, demanding to know how and why he, the student, had failed Roman Law II. According to folklore, Beinart's response was to the point. "You failed because you didn't get enough marks," he informed the dumbfounded young man. (Today's lecturers may envy Beinart's candour.)

Over The Moon. Such was the reputation of UCT's geochemistry department and its Professor Louis Arhends that the university got to share in some groundbreaking space research. Shortly after the 1969 Nasa moon landing, the department received a piece of moon rock from the Americans for geochemical analysis, the only lab outside of the United States to do so.

UCT Birthdays. This year's anniversary celebrations are certainly nothing out of the ordinary. In 1979, turning 150, UCT also rolled out a roster of festivities. This included a score of conferences over the year, and a service at the Groote Kerk in Cape Town on October 1, the same venue where the SAC had toasted its opening a century and a half earlier. There was also a special ceremony at which the university awarded honorary degrees to Professor Richard van der Ross, a UCT graduate who would serve as rector at the University of the Western Cape during the formative 1975 to 1986; the Inkatha Freedom Party's Chief Mangosuthu Buthelezi; Nico Stutterheim, then chair of Council at Wits University; and tobacco tycoon Anton Rupert. And the icing on the birthday cake? The university got the post office to issue a commemorative UCT postage stamp, costing four cents, featuring a panorama of the upper campus, shot by Robert Denton, a lecturer in photography at the Michaelis School of Fine Art.

Monday Paper wishes to thank the registrar, Hugh Amoore, for his very knowledgeable assistance with these pieces.