Campus landmarks plot birth and growth of a university 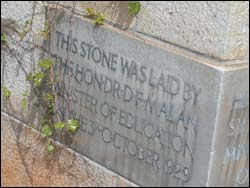 Friday October 1, 2004, is a blazing day. Jameson Hall is being cleared of 175 birthday party debris. Outside at the two World Wars memorial, students jostle past, many unaware of the symbols they pass. Chiselled and bound in the mortar of the upper campus are reminders of UCT's beginnings, milestones of the oldest university in sub-Saharan Africa.

Though UCT has a longer history, this campus is a sprightly 75-years old. The university moved here in 1929 after occupying locations in Long Street (the old orphanage), and the Orange Street campus.

As a university, UCT was established in 1918. But its roots go further; 89 years lie between the two ceremonies that produced the institution. On October 1, 1829, the South African College (SAC) was formally inaugurated as a private high school for boys at a Groote Kerk service in Cape Town, and on April 2, 1918 (fortunately, April 1 was Easter Monday) UCT was created. On that day, the SAC, a co-educational university college, was officially transformed into a fully-fledged university, the University of Cape Town, with which is incorporated the South African College, to give its full legal title.

It followed an auspicious time in the country's history. The new Union Government, pushing English/Afrikaner reconciliation after the Anglo Boer War, was keen to implement Rhodes' idea to establish one national teaching university on his estate at Groote Schuur.

In 1906 Alfred Beit, one of Cecil John Rhodes' greatest collaborators, had died and left Â£200 000 for the creation of a university in Johannesburg. This site was, however, not to the liking of the government which preferred Rhodes's idea of an institution on his estate where the youth could come together, diluting the enmity between Boer and Brit.

Beit's brother, Otto, and another mining magnate, Sir Julius Wernher, were persuaded to allow the Beit Bequest to be used to pursue Rhodes's dream and to add a further Â£300 000 to the sum. But the SAC, which had aspirations of becoming a fully-fledged university, realised that a national university on Rhodes' estate, on its doorstep, would stifle its ambitions.

With an eye for an opportunity, John Carruthers Beattie, a leading SAC professor, saw a chance to develop the SAC into the national university. With Beit's bequest due to expire in 1916, the SAC made an "audacious bid" to secure its goal. In the interest of higher education, Beit's trustees agreed to allow the money to fund the University of Cape Town, incorporating the SAC.

The news was not well received in Johannesburg. Words like "swag", "thieves", "dishonourable intrigue" and "gang" were used by parliamentarians and press to describe the development.

Rhodes's architect, Herbert Baker, was asked to take on the project, but was too busy for the commission. In 1912 he had joined Edwin Lutyens in designing the government buildings for New Delhi. His disciple, Joseph (JM) Solomon, was appointed instead. He set out visiting the grand old universities of Europe and North America.

His plans, presenting three tiers of buildings, for teaching, residence and sport, reflected design elements of Oxford and Cambridge in the residences, while the dome on the original plan is reminiscent of Thomas Jefferson's University of Virginia. But politicking and the interruption of the post-war depression stalled the work.

The architect was desperate. Demotivated and depressed by countless delays and interference, Solomon caught the flu (it was part of a worldwide epidemic). Though he recovered, it left him feeling weak and depressed and he committed suicide.

Time was running out. Another pupil of Baker's, CP Walgate, was brought in and, with a canny, cost-cutting eye, he reduced the scale of the scheme. Jameson Hall, for example, originally intended to have 10 columns, was built with six. The conspicuous dome was never added. With a loan of Â£750 000 (to cover the expenses of building on the formidably steep slope), the builders moved in.

"Remember," says Professor Howard Phillips, whose book The University of Cape Town 1918-1948: The Formative Years, documents these early years, "these were pre-bulldozer days."

There are markers on the campus recalling stages of the campus's growth. At the War Memorial overlooking the rugby fields, you can see the slab laid to mark the sod-turning ceremony (1). Only, no sod was ever turned. On July 2, 1920, the designated day, a north westerly gale blew and there was a deluge. Guests huddled in the Summer House (below the present highway).

By the mid-1920s most of the excavation was done, and excavations began for the medical school too, choosing to position the school alongside the future Groote Schuur Hospital. While the decision was pragmatic for teaching purposes, Phillips believes UCT is the poorer for it. "The medical school has never been part of campus."

In the entrance to Smuts Hall is a stone commemorating HRH's the Prince of Wales' visit in 1925. The first name given to the men's residence was the singularly unimaginative New Men's Residence, later changed to Smuts Hall (2) in the 1950s. (Thankfully, university administrators resisted a suggestion to rename it Queen's Hall, in honour of Queen Elizabeth's visit in 1947, when she received an honorary LLD degree.)

There are also some oddities. Why was Jameson Hall named after a medical doctor, Leander Starr Jameson, a man who was imprisoned in England for his part in the Jameson Raid and who had little to do with UCT? It was probably because he was a close confidante of Rhodes' and this was a memorial to his memory after he died in 1917. Not that this worries the students as they sun themselves on that famous UCT landmark, Jammie Steps, a vantage point to lunch a thousand chips.

By 1929 all the core buildings had been completed, bar the library, Jameson Hall and the student union, later the Otto Beit Student Union. The library was later named after JW Jagger, a member of the university Council and bibliophile, but bears a cornerstone laid by then minister of education, DF Malan (4), who became the first apartheid-era prime minister of the Union.

The core of 11 original buildings was disturbed only by the modernist New Lecture Theatre building at the end of University Avenue (north). During the 1950s, when the economy demanded more and more skills, there was a surge of new buildings, dubbed "the second building of UCT". In 1957 there was only one building above Jameson Hall. By the latter 1970s there was a concrete block of buildings beyond the line, says Phillips.

But even further beyond that line lies another marker of history. Above the Tennis Club is a significant grave, that of UCT's first vice-chancellor, Sir Carruthers Beattie (5), keeping watch over the institution he played a part in bringing about. Today, the campus sweeps to the left and right. It's a lonely place; perhaps those were his thoughts. But the fact that he chose to be interred here hints at a lasting attachment to the institution, his confidence in its course and growth over the passage of time.

UCT had a nine-hole golf course on the slope above the teaching buildings during the early 1930s, allegedly a popular night-time haunt for dating students.

UCT has links with at least two former zoos, the Groote Schuur zoo and the old Dutch zoo in the Gardens. You can still see the famous Lioness Gate at Hiddingh campus.

The first architect, one of Sir Herbert Bakers' protÃ©gÃ©s, JM Solomon, committed suicide, so long was the delay in getting the plans approved. The present campus was designed by CP Walgate.

The famous ivy that adorns the buildings is Virginia creeper, deliberately recalling the ivy-clad buildings of Oxford and Cambridge, on which Solomon modelled UCT's residences (the porticos and quads in the residences echo these buildings).

There is still a stream that runs under Beattie Building, which sometimes becomes very apparent in the basement during winter storms.

Affirmative action was first introduced to UCT in the 1920s to accommodate ex-servicemen after WWI.

"Stepsitting" at the Jammie Hall is a long tradition at UCT, as photographs from the early 1930s show.