Time to rebuild at netball club 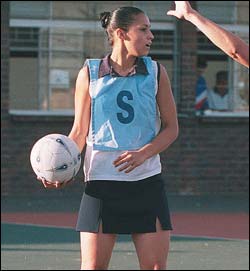 Last woman standing: When the netball squad gets together next year, Keeyan Dick will be one of the few survivors of the 2004 UCT first team.

The 2004 Super League has been no bed of roses for the netball first team.

Starry-eyed after winning promotion in a flawless 2003 campaign, life in netball's top flight took the UCT players by surprise. The side lost all but one of its games, and had to wait until just about the end of the season to register that single competition victory against Tygerberg B by 44-37.

That win followed hard on the heels of the other bright moment in the season. A UCT team made up of first- and second-team players breezed to the top of the B section at the Sassu games in Potchefstroom (the club voted this squad as its team of the year at a recent AGM).

That was as good as it got, though, and the first team finished bottom of the Super League, and is likely to be relegated to the A section. That may not be such a bad thing, says Louise Cameron, who takes over as first-team coach next year following 2004 incumbent Alfreda Luyt's recent resignation. The first team is set to lose nearly all of its players - including club chairperson Juliet Birch and star defender and captain Palesa Mokomele - at this year's graduation. Goal shooter Hilda-Mart du Toit, who got thrown in the deep end this year after being drafted from the third side into the first team, looks likely to be out as well after a serious knee injury. And Lushinka Scott, the side's hardworking attacker, finishes school this year but isn't quite sure where she'll end up studying in 2005. "The team struggled in the Super League with many good players," says Cameron. "It wouldn't be fair to have so many young new players having to play there."

Cameron will have her work cut out in the new year as she pulls together a fresh squad. "I'm going to have to start from scratch," she points out. "It's going to be a huge challenge."

There may well be an up-side to this clean slate, some believe. "Sometimes change is a good thing," says departing chair Birch (she finishes her speech therapy studies soon). Keeyan Dick, one of just two or so stalwarts who'll be sticking around for at least one more year and who was just voted onto the club's new exco, agrees. But there are a couple of things she'll want to see in 2005. Like the team adopting a more positive frame of mind. "It came right towards the end . . . but for a long time this year we just didn't have the right attitude," she says.

Unlike this season, 2005 is still brimming with possibilities.