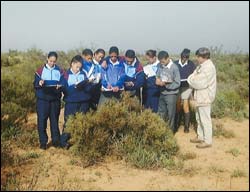 Mystery mounds: Prof John Parkington of the UCT archaeology department in the field with pupils from Clanwilliam Senior Secondary School.

Graveyards, rock paintings and those mysterious hills that dot the Swartland near Piketberg all feature in the curriculum which has been developed by the Living Landscape Project based in Clanwilliam.

The Living Landscape Project, initiated by Professor John Parkington from UCT's archaeology department, aims to reconnect people with the pre-colonial past by exposing them to the historical, archaeological and environmental heritage of the Cederberg area.

Its recent successes include training 20 young people from the Clanwilliam district in the areas of catering, crafting and guiding, as well as receiving school groups at a refurbished field school where they can learn to "read the landscape" through integrated-learning field trips.

Now the project has received a R650 000 boost from the National Lotteries to further develop the curriculum into work books for use in schools, as well as for the publication of more archaeological texts to support the project.

The curriculum already in use at the Clanwilliam field school develops a range of skills in children, from recognising visible patterns in the landscape and learning how to explain them, to reading and drawing maps of various scales to collecting and manipulating numerical information.

For instance, the curriculum developed around graveyards requires the learners to answer questions deriving information from what is recorded on gravestones.

Parkington explains: "Graves are very interesting to work with. They are clothed in questions about social history and contain dates, writing, numbers and symbols."

Learners, for instance, will be asked to work out whether women live longer than men, when most deaths occur (summer or winter) and to record the symbolism depicted on grave stones and how this has changed post-apartheid.

In another project, which Parkington says is his personal favourite, learners play detective, working out what lies behind the phenomenon of the "heuweltjies" (little hills) that dot the landscape of the Swartland. These hills, particularly visible around Piketberg, are found all the way up the West Coast, and are (in fact) fossilised termite mounds.

By using GPS, measuring distances between the hills and recording the plant life that grows on and around them, the learners are encouraged to come up with possible solutions to how they came into being.

The fresh injection of money from the Lotto will now create the opportunity for this work to be made more widely available in schools, with the ultimate intention of producing workbooks for teachers. The other half of the money will be used to publish more archaeological books to sustain the Living Landscape Project through their sale.

They will follow the San series which already includes The Mantis, the Eland and the Hunter, and Cederberg Rock Paintings.

This project is just one of many exciting ideas and proposals in the pipeline. Parkington hints at the prospect of building a "time machine", the consolidation of the rock art sites into an open-air park, and the creation of a sculpture garden in what was once a no-man's land between the white and coloured parts of Clanwilliam.