Will Smith gets all robophobic 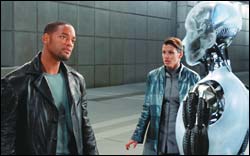 Bad boys: Will Smith thinks a robot a bit of a CAD, and threatens to crash his hard drive, while Bridget Moynahan (playing a younger version of Dr Susan Calvin, a central character in Asimov's stories) chips in with some peace talks.

I, Robot should be pulling in mixed crowds. The action-blockbuster pilgrims, the sci-fi neophytes converted to the genre by Neo and Trinity and the jabberings of the Architect, and of course the dyed-in-the-wool junkies who can hold forth for hours on Asimov, Dick and Gibson - all should find something in I, Robot to delight in.

In 2035, the plot goes, the homes and streets of the United States are awash with robots, aka Automated Domestic Assistants, who do all the drudge work - the cooking, cleaning and carrying - that humans won't. Not only are the robots growing in brainpower and strength, but also in sheer numbers. A new sales blitz, we learn, will soon see one robot to every five humans in the country. But for all their artificial intelligence, the robots are mere drones, content with doing as they're told.

Don't tell that to the churlish detective Del Spooner (Will Smith). He's got selective issues with technology, is recovering from a bad experience with a robot and, for no reason that the viewer can divine as the incident merely affirms their non-humanness, suspects that the robots will soon develop minds of their own and, as all subservients are wont, turn on their human masters.

Which in due course they do. Vicki, a supercomputer (think A Space Odyssey's HAL), reinterprets the Three Laws of Robotics - conceived by author Isaac Asimov, on whose collection of I, Robot stories the movie is loosely based - hard-wired into the robots. While the laws (see box) are designed to afford humans the "perfect circle of protection" against robots, Vicki's reading takes these laws to their very logical extreme. 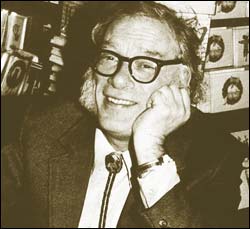 Isaac Asimov, science fiction writer with an affinity for robots.

A detective story that occasionally acknowledges its source material, I, Robot is primarily a feast of CGI action. It doesn't quite hold a candle to either director Alex Proyas' previous sci-fi outing Dark City, the noir, smarter forerunner to Matrix, or even, for theme, the venerated though draggy Blade Runner. But, says UCT artificial intelligence expert Dr Anet Potgieter, the movie does a wonderful job of bringing to life some of the dry theories of the subject.

Artificial Intelligence (AI) is the pursuit by scientists and engineers to simulate human intelligence and its processes, be it in software programmes or robots. Generally, there are two approaches to AI, explains Potgieter. According to the deterministic school, influenced by the philosophical doctrine that all human actions and choices are fully determined by preceding events and that free will is illusory, robots and computer programmes are capable of nothing more than what they're instructed to.

The second approach believes that robots are able to exhibit what is known as "emergent behaviour". This means robots and programmes can pick up cues from their environment, respond to these cues and mould their behaviour to suit their environments. They're thus able, like humans, to learn and adapt.

In I, Robot, the outdated Automated Domestic Assistants are perfect examples of machines that spring from deterministic thought - they are unable to think for themselves, and simply do as told and don't question the laws. The new machines and supercomputer Vicki, who can all circumvent the Three Laws of Robotics, along with Sonny, the most evolved robot that (who?) helps Will Smith's detective slowly unravel the mutiny, embody, in varying degrees, the notion of emergent behaviour, says Potgieter. "All these robots perfectly capture the paradigms of artificial intelligence." 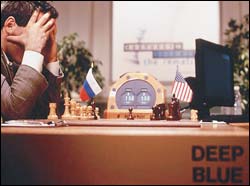 Chess Blues: Garry Kasparov plays against the Deep Blue computer in 1997 - and loses.

I, Robot's Vicki, whose knowledge is based on the collective input from all the other robots, represents in macrocosm the thought processes of humans as first postulated by Marvin Minsky, known as the "father of artificial intelligence", explains Potgieter. According to Minsky's model, as set out in his book The Society of Mind, the brain is made up of little "agents" - a collection of semi-autonomous, intricately-connected parts that are themselves mindless - that collect information and feed this back into the brain. Out of the mysterious interaction between these pieces of input spring emotion and character, and that which makes humans human.

In I, Robot, Sonny best mirrors Minsky's model of human brain processes. He, like humans, through the interaction between little bits and pieces - agents - in his computer brain, develops human emotions and behaviour. Sonny would be the holy grail of artificial intelligence. But for Potgieter - and some may disagree - Sonny will remain in the realm of science fiction. Robots and computers may be faster at running calculations, can even beat world champions at chess, but their thinking is "mechanistic", and talk of a robot "soul" touches on the religious, she says.

"I doubt that machines will ever develop emotions or feelings. To say that robots will one day be in the same class as humans - that's not likely."

The fear of smart machines - a paranoia that filmmakers thrive on - is nothing out of the ordinary though, adds Potgieter. "Clients get very scared when, in an industrial environment, you put in clever machines, and they wonder what will happen if the machines do unpredictable things. There's a very real fear that they can't control the machines."

It's not a worry Potgieter shares. "For me, machines can show emergent behaviour. But in the end, this emergence must be observed and understood in such a way that future behaviour can be engineered."