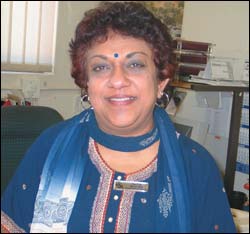 Monday Paper's Five-Star Staffer accolade pales in comparison to the National Office Professional of the Year 2004 title - a laurel held by none other than UCT-affiliated staff member Lindy Mudenda.

Secretaries and office professionals from all over the country vie for the coveted award, held annually since 1983 and previously known as National Secretary of the Year, which is organised by the Association for Office Professionals (PSA).

Mudenda, the office manager at the Centre for Conflict Resolution (CCR), made her way through an arduous judging process to collect the award at a gala event for 300 guests held at The Castle in Kyalami, Johannesburg, on September 1 (Secretaries' Day).

Judging involved the completion of a questionnaire (used to whittle down the entries), nominations from bosses and colleagues (determined the top 25), and a three-hour written test where contestants were asked to undertake a variety of tasks associated with the office professional's role, lead to five finalists being chosen.

These individuals (three from Gauteng and two from the Western Cape) made their way to Johannesburg for another two days of judging, which included delivering an impromptu speech at a cocktail function, a 20-minute prepared presentation to a panel of five adjudicators and an intense interview with the panel.

"It was a pleasant shock when the announcement was made," said Mudenda. "Throughout the competition you are told you are already a winner just for having gotten this far, but it was wonderful to actually go up and collect the trophy. I felt very proud."

A Sri Lankan by birth, Mudenda married a South African and lived in Zambia for many years before moving to Cape Town. With a career spanning 32 years and three countries, she says she has "seen it all, done it all and heard it all".

"I started out as a junior typist and continued to work my way up through the ranks. Having reached the pinnacle of my career now, I feel I have a lot of experience that I would like to share with others."

And Mudenda will indeed be able to do this as she acts as an ambassador for the profession during her reign. In addition to her duties at the CCR, which include supervising four administrative staff members, she will be called to speak at various conferences and to make guest appearances at functions to promote the profession.

"I want to get the message across that being a secretary is not hum-drum. It is a profession to be proud of," she explained. "The perception that a person is 'just a secretary' needs to be done away with as office professionals are now part of the management team and an integral part of the successful running of an organisation.

"There are a lot of young people out there who don't know what to do with their lives. By letting them know what the profession can offer them, I hope to provide some guidance and direction. I'm not trying to shake the world, but I would like to look back on my year and see that somebody has gotten something out of my exposure."