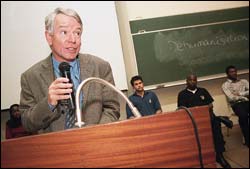 Professor Halton Cheadle from the law faculty has been appointed to the International Labour Organisation's Committee of Experts on the Application of Conventions and Recommendations. He is the first South African to be appointed to the post. Cheadle participated as a technical expert in the drafting of the Bill of Rights in the South African Constitution. He sat on the Presidential Commission on the labour market and was appointed convenor of the drafting team responsible for South Africa's Labour Relations Act. He has since drafted labour legislation in most SADC countries including Namibia, Swaziland, Botswana, Tanzania, Mozambique and Angola. Cheadle has advised the Lesotho Government on electoral reform and drafted amendments to the Lesotho Constitution and their Electoral Act. He is also the founding editor of the Industrial Law Journal.

The 37 candidates standing for the Students' Representative Council (SRC) went under the microscope last week as the 2004/2005 elections officially kicked off. September 6 to 10 served as interrogation week - an intimidating moniker, joked guest speaker Jeremy Cronin (above) - where students got to sound out candidates and their manifestos at lunch-time sessions on upper campus and evening meetings at residences. And if the cant was one-dimensional at times, which could be put down to time constraints, the grilling was never less than passionate. Equally energised were the red-carpet speakers who took time out from their busy schedules to come to campus and buck up the candidates. Among the noteworthies were Cronin, an African National Congress (ANC) member of parliament and a former political sciences lecturer at UCT who famously got the boot from the university in the mid-1970s after being arrested for conspiring with the ANC and the South African Communist Party; and Helen Zille, member of parliament for the Democratic Alliance. The SRC election enters the home straight this week as students hit the ballot boxes to decide who takes office on November 1. 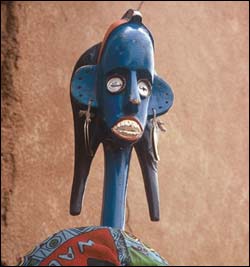 Exhibitions at the Irma Stern Museum

Fiona Moodie will be holding an exhibition of children's book illustrations and recent abstract paintings from September 8 to 25. Moodie has lived and worked in Spain, Italy, France and the United Kingdom and regularly participates in international exhibitions, including the Illustrators Exhibition at the Bologna Book Fair. The Boy and the Giants, Noko and the Night Monster and The Wonder Shoes are just some of the titles on display. Another exhibition will see the Handspring Puppet Company in association with AngloGold Ashanti with additional sponsorship from Business and Arts South Africa (BASA) present Patrimony, a selection of Malian puppets (above) from the Coulibaly family collection on view from September 9 to 25. Guided tours will take place on September 14 from 10h00 to 11h00, September 17 from 11h00 to 12h00, September 18 from 15h00 to 16h00, and on September 25 from 10h00 to 11h00. The Irma Stern Museum is open from Tuesday to Saturday between 10h00 and 17h00. Further details can be obtained from tel 685 5686 or 686 9340. 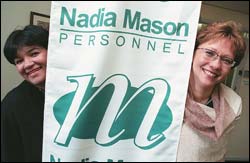 Nadia Mason Personnel (NMP) was recently named the exclusive provider, for the next 18 months, of temporary staff to UCT. The forte of the black-owned company is the recruitment of black staff, handpicked from its network of colleges, community organisations, NGOs and corporate associates, says founder and MD Nadia Mason (top right). Former and current clients include BP South Africa, the Department of Transport, Old Mutual, Sanlam, Santam, Sea Harvest and, in the largest recruitment drive in the Western Cape, Sun International's GrandWest Casino where, in 2000, the company had to whittle down 40 000 calls to 2 000 placements. Along the way NMP and its honcho have picked up a raft of awards and mentions, among these the Western Cape Business Opportunities Forum's 2001 Business Person of the Year accolade, with Mason becoming the first woman to win the trophy (handed to her by finance minister Trevor Manuel), and an Impumelelo Innovation Awards Trust nomination as one of South Africa's top 300 emerging companies. UCT can expect, promises Mason, the personal touch from the "warm, bubbly" head of the company's temp division, Estelle Doralingo (left in picture), who's only a phone call away, 24/7. 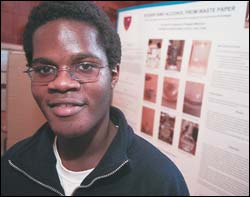 Jameson Hall was the setting for this year's Eskom Cape Town Expo for Young Scientists, hosted at UCT from September 1 to 3, showcasing the projects of school learners from around the region. The competition is the qualifier for the national finals in Pretoria in October. Among the hundreds of students taking part was 16-year old David Lwabona (above), a grade 11 learner from the German International School. Lwabona is the son of the late Dr George Lwabona, a Tanzanian national who lectured in the School of Management Studies until his death in 2000. For their project, Lwabona junior and his teammate Keegan Mossick are exploring the possibilities of extracting sugar and alcohol from waste paper, substances they then want to use as fuel.