All that shimmers must be platinum 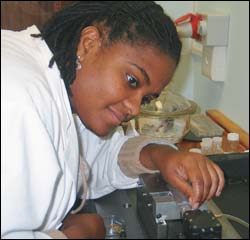 For a woman who works with platinum all day, researching alloys that will render the metal even more attractive to jewellers, American-born postdoctoral researcher Dr Kamili Jackson says she is still working on owning a piece herself.

"It looks good with blue tanzanite stones," the mechanical engineer says, adding, "I'm still a girl, after all."

A new micro sample tensile testing facility at the Centre for Materials Engineering at UCT will allow researchers like Jackson to test the tensile strength of existing and new platinum alloys vital to boosting the growth of the South African platinum-jewellery manufacturing sector.

South Africa is a major producer of the white metal, more expensive than gold and increasingly sought-after by the world's discerners of fine jewellery. The platinum jewellery industry is worth US$1-billion a year. Even one percent of that would mean significant revenue to the country.

Although South Africa does not export finished jewellery, Jackson believes the country has the potential to be an expert in platinum pieces. And although UCT has been researching platinum for several years, until now researchers have been unable to measure the characterisitics of platinum alloys.

Alloys are vital for "beefing up" the metal. For all its bright, lustrous appeal, platinum is notoriously soft - too weak to safely clasp a diamond, for example. To earn the platinum hallmark, jewellery must contain 95% of the precious metal (18 carat gold, by comparison, contains only 75% gold). The remaining 5% (weight) is all metallurgists have to play with to unlock a compound that will increase platinum's tensile strength, while maintaining the colour and texture of the metal, very important to the discerning eyes of jewellers - and their clients.

The most widespread alloys are platinum and copper and platinum and ruthenium. Jackson is looking at platinum and chromium alloys, and alloys whose atomic mass is compact for their weight. Ideally, what you want is an alloy that hardens the metal after the product is heated following manufacture, that will retain its shape, wear better and hold its precious cargo of gems.

A cornerstone of this research is the characterisation of these alloys through mechanical testing. The standard tensile test provides data on strength, ductility, strain hardening and elasticity. UCT researchers had previously relied solely on hardness tests to give some idea of strength but had no means of finding out other properties.

Platinum had not been subjected to tensile testing because the procedure requires a fair amount of material and is pricey. You're looking at R39 000 for a typical tensile sample (assuming little loss during machining).

To get around this, Jackson built a microsample tensile testing machine, one that uses tiny samples, not much bigger than a fingernail. The second phase involves testing the various alloys being investigated at UCT, to identify those platinum alloys that will be more useful to jewellers.

The interdisciplinary team working on the project is one that Jackson particularly enjoys, a combination of undergraduates, postgraduates, her supervisor Dr Candy Lang, as well as an electrical engineer, a representative of minerals processor Mintek, and jewellery-design students from Cape Technikon.

"It's not often that you get an opportunity to work with the end user of your product," Jackson adds. Or have your research used for art. And jewellery is art after all.