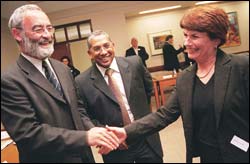 The first time new UCT Council chair and human rights lawyer Geoff Budlender set foot in the Senate Room in Bremner was 1968. He even slept in the room at the time as part of a student sit-in.

Thus, his involvement with Council - and the Senate Room, of course - has come full circle following his appointment as chair at the meeting of the new 30-member Council last week.

Not that the 1968 occasion itself was soporific. Budlender and other students were there staging a marathon sit-in (they occupied Bremner for some nine days) to protest both the state's intervention and a decision by the existing UCT Council, which capitulated to some government arm-twisting, to back-pedal on the appointment of an African, Archie Mafeje, as senior lecturer to the department of social anthropology. (Mafeje went on to a distinguished scholarly career in the US and elsewhere, and UCT Council did later make a formal apology.)

Budlender returned to the Senate Room under less trying circumstances in 1971, as ex officio Council observer (it would be some years before the law was amended to allow students to be full members of the Council) in his capacity as SRC president. This was around the time when he caught the eye of journalist Max du Preez, then a Maties student, who in a recent article for The Star cited Budlender as one of the influences in his own political awakening. Budlender was back again in 2002 as a member of Council chosen by Convocation.

Much has changed since 1968, he noted following his election last week.

"In every way. We're a university in a democracy; we have to define a new relationship with government and with society, and we now have the opportunity to prepare students to do research for a democracy, instead of being in a mode of resistance. UCT is an exciting place to be right now."

Little did he think during that 1968 protest that nearly 40 years later he would return as chair of the very same body he was crossing swords with.

But it's a responsible job, and one he's keen to take on.

"It's very daunting, but I'm looking forward to it. It's very exciting for me."

The Council has undergone a change in structure in line with changes to the Higher Education Act, 1997. Among these changes is a reduction in numbers from 38 members to 30.

The Council governs the university and is constituted according to the provision of the Higher Education Act, 1997, and the University of Cape Town Statute.

Its responsibilities include determining the mission, objectives, goals, strategies and policies for the progress of the institution. It must also ensure an environment conducive to efficient, effective, economical and ethical attainment of these goals.

In addition, the Council has the responsibility to maintain and ensure a financially secure, healthy and viable environment and to account for all decisions taken at UCT, including the submission of the required reports and documents to the Minister of Education.

The members of the new UCT Council are as follows: