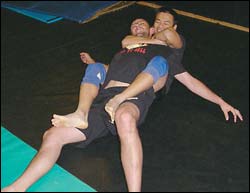 Bump and grind: Jeff Chen (doing the squeezing) and Cas Breijer (film and media studies), show off some of their fighting skills.

Jeff Chen and organisers from the Fighting Sport Athletes Alliance have planned a martial arts festival at the UCT Sports Centre on Sunday, August 1, a feast of over 25 of the Cape's clubs who will demonstrate their kick-boxing, aikido, ju jitsu, karate and other grappling, wrestling and punching skills.

The UCT martial arts clubs will be there to demonstrate their art to those keen to learn more about these ancient disciplines. This includes the new UCT Capoeira Society. Capoeira is a Brazilian martial art (read: flamboyant and with a distinctive Latin flavour) with over 400 years of history.

Taiwanese-born Chen, a PhD in Professor Kevin Naidoo's computational chemistry research laboratory, began practising various forms of martial arts only after arriving in South Africa in matric. "In Taiwan my parents sent me to learn the violin. I couldn't afford to damage even a finger."

Chen now enjoys a different form of the martial arts almost every night of the week. His idea of a fighting sport alliance is to blend the distinctive elements of each discipline: punching, kicking, throws and rolls, and so on.

In a rugby-cricket-soccer dominated national sports scene, martial arts may have a lesser profile, but Chen believes the skills learned in the martial arts complement other mainstream sports and even assist in honing skills.

The martial arts also satisfy another important aspect. Chen is not a team-sport person.

"If I do well, it's my achievement. If I don't, I have no-one else to blame," he explains.

The lesson is applicable to his academic studies.

And no, the discipline is not about squeezing the air out of someone's lungs (though this is an acceptable thing to do, Chen says, in some of the more physical and contact-orientated forms).

"I'm essentially a passive person, a theoretician. I enjoy the science behind the martial arts."

Chen is also keen to coach: like computational chemistry, this requires elementary and theoretical skills.

But the real attraction lies deeper. "It's about knowing your boundaries (when to "tap out" because you're about to pass out) and being able to work within these."

The festival starts at 10h30 and there will be a nominal charge for entrance tickets. The tickets do, however, give you entry into a lucky draw.