Campus is talk of Africa 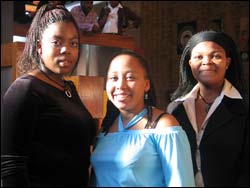 Scores of eloquent, expressive students descended on UCT in early July, eager to begin their verbal duels in this the ninth National University Debating Championships.

The theme, The Talk of Africa, was neatly coined to reflect 10 years of democracy.

Two teams from KwaZulu-Natal and one team each from Stellenbosch and Namibia contested the English Second Language finals. But it was the team from the wine-lands that took top honours, arguing against the motion that voting in the national elections should be compulsory.

Two teams from Wits and one each from Stellenbosch and the University of KwaZulu-Natal (Howard campus) contested the finals, with one of the Wits teams taking the laurels. They argued for the motion: that a democratically elected party with an absolute majority benefits developing nations.

The UCT teams, according to debater Rob Garlick, fared less well, with both being knocked out in the finals. There was a good reason. As UCT was the hosting institution their debaters were into administration and organisation, a full-time job.

"In addition, five of our previous top team of six were on the organising committee, which counted us out," he added.

One of the competition's innovations was the introduction of six round robin sessions instead of the regular five. The organisers also ensured there was a day for a comprehensive training programme, this for beginners right through to adjudicators, "bumping up the quality of debating", as Garlick put it.

The organisers have extended special thanks to their main sponsors: the Vice-Chancellor's Office and British American Tobacco. A tobacco company? Interestingly, the company asked that one of the semifinal topics deal with a tobacco-related issue. The content of this session will be used in their corporate social report, Garlick added.

"They saw it as an opportunity to discuss tobacco-related issues to enhance informed opinion." The company will also send the two finalists to the world university championships in Malaysia at the beginning of next year.

One of the highlights during the second final was a debate involving Vice-Chancellor Professor Njabulo Ndebele and Judge Dennis Davis on the role of public debate in a democracy.

There was other good news: teams from the Universities of the North and the North-West rallied for the competition for the first time, an indication that debating is growing in popularity among students. (Or could it have been the venue, a balmier- than-usual Cape Town?)

The debaters also saw some of the loftier venues the Mother City has to offer, the Civic Centre (which hosted the final banquet) and the Provincial Legislature. Some will remember the latter venue longer than others.

One of the semifinals was hosted there and the adjudicators and debaters were jammed in a lift for 30 minutes. Not one they could have talked their way out of.

And, judging by the reputation of some visiting debating teams, the championships signalled more rhetoric than romp.

"It was unique; the first championship in four years not to have anyone sent to hospital with alcohol poisoning," Garlick marvelled.

But they did have one appendicitis case.