Netball jacks up game, but still no win 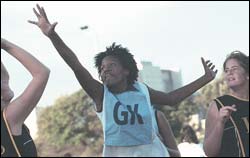 So close: UCT players, like captain Palesa Mokomele, stretched themselves for their game against Tygerberg B, and may now be finding their feet in the Super League.

The UCT first team came heartbreakingly close to breaking its run of (now five) defeats in the WP Netball Super League on Saturday, May 22.

The side was down 8-11 after the first quarter of its match against Tygerberg B, but bounced back to draw level 17-17 in the second. Playing some stunning netball in the third quarter, UCT outscored their rivals to take a healthy 27-24 lead into the final session.

Tygerberg, however, pulled the game out of the bag when, in keeping with its game plan to continue swapping players around, it brought on all of its substitutes for the final quarter. UCT, exhausted after its efforts in the third session, had no-one on its bench, however, and failed to keep up with the fresh Tygerberg players. The side finally went down 33-36.

"We were very, very disappointed," said captain Palesa Mokomele afterwards. "We thought that maybe there was an outside chance that we had won, until we saw the score."

Tygerberg's goal spree in the final session had to be credited to that decisive swap of players, Mokomele said. "It takes about a quarter to find your feet against the person you're playing against. But by the time you'd gotten used to someone, it was the end of the quarter and they were swapping players around again."

The narrow defeat had, however, convinced the team that it's finally adapting to life in the Super League, added Mokomele. "Our confidence is coming back now."