Heroes of the past inspire new Council member 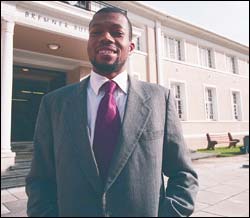 Setting the pace: Chupe Serote, new PASS representative on Council, plans to make sure that transformation is never far from the group's mind.

It is, after all, the selfsame body that, way back in 1923, declared openly that it would not be in the university's interest to admit "native or coloured" students to its campus, setting the trend for the following decades. But Serote, recently elected to Council to represent all professional and support staff (PASS) in payclasses one to 14, draws inspiration from the likes of AC Jordan, Pallo Jordan, Albie Sachs, Jack Simons and Sarlea Dollie. These individuals, all former members of Council, did not hesitate to speak their minds about the university or its policies, Serote reports.

It's been some 80 years since Council penned those telling words, and Serote knows that much has changed since then. But many of the issues still, in revised form, haunt the university - transformation in particular. That was one of the topics listed on Serote's statement of intent, which drew attention to the development of human capital within UCT, staff and student equity, and fiscal discipline vis-Ã -vis the university's transformation agenda.

"Council need not be seen as only putting policy into place," he says. "I think it would have to take cognisance of what tools or enabling mechanisms there are to affect the necessary change. The duties of Council, as far as I see it, need not end at policy-formulation level."

Serote recognises, however, that he represents a very broad PASS community with a "multiplicity of interests". "But if you look at the various representative staff bodies and what they stand for," he notes, "although they look at things from different angles, there is not necessarily an inherent conflict on what they seek to advance."

Serote will be but one new face on UCT's restructured Council. The full compilation of representatives will be finalised only towards the end of June, when Monday Paper will provide details of Council's final make-up.