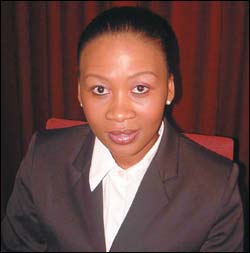 Nonhlanhla Happy-girl Buthelezi (MBA 2000), will be propelled into the international eye later this year when a documentary on women and education in Africa, in which she is one of three women featured, is aired across the US, Europe and Africa.

The film, which is being made by the Carnegie Corporation and the United Nations Development Programme (UNDP), highlights the difficulties that black women in Africa face when embarking on further education. It profiles three successful women from three different African countries, each having overcome considerable odds in order to gain graduate or postgraduate education.

And Buthelezi's tale is likely to resonate with millions of women across the continent - which is what made her a perfect fit for the film. The director of the documentary, Gill Fickling, said that while it aims to explore the problems that women encounter in Africa, the film also wants to be "a kind of inspiration for other African women viewing the programme, to help raise awareness of the possibilities open to women".

Born in the Durban township of Lamontville, Buthelezi says that she has a "humble background". One of five children with schoolteacher parents, from the start Buthelezi was determined to get a good education. But like so many other black women, finding the money to fund her ambitions was a constant problem.

Her first break came when she managed to secure a bursary to study for a BCom degree at the University of Natal. However, when this bursary was withdrawn, the rest of her tertiary education career was made possible only through a series of additional hard-won bursaries (from Kagiso Trust and Engen Petroleum). After graduating and while working first for Engen and then for NestlÃ©, she furthered her career ambitions with part-time studies in management accounting and tax.

But despite all this, Buthelezi was not finished yet. She dreamed of a career in corporate finance and to achieve that aim, went back to university, this time to get an MBA. Perhaps one of the most expensive degrees around, getting the finance was again the biggest obstacle.

"When I left Joburg to go to Cape Town, I had about R20 000 only, which was enough for four months' accommodation. My mother had retired in 1999, so she lent me R10 000 from her pension payouts, and my friend helped me sell all my furniture, which raised about R5 000 and the rest was my R5 000 savings."

As a result, she says her first two months were very difficult at the business school as she had not paid the registration fees and had no money for books, didn't have a car or a personal computer.

"But I never lost hope, I prayed a lot, cried a lot, and prayed some more!" says Buthelezi. Luckily, loans from Standard Bank and Nedbank were secured, which took care of immediate financial needs. And then Buthelezi started down the bursary track again and managed to secure funding from the Businesswomen's Association and Misys Charitable Foundation in the UK. After that she could start focusing on her studies.

And her investment in herself has paid the dividends she was after. Buthelezi graduated with flying colours in 2001 and has now realised at least one of her career ambitions: she works for PricewaterhouseCoopers as a manager in the corporate finance division specialising in ICT for government and other utility clients. It is a high-profile job with responsibilities that stretch across the southern African region.

To help her stay at the top of her game, Buthelezi has enlisted the help of another prominent and successful black woman - Dawn Mokhobo - a previous winner of the Nedbank Businesswoman of the Year Award - to be her mentor.

"In today's challenging and rapidly changing business environments formal education is not enough for professional advancement for young people. There is an eminent need for mentoring and/or executive coaching," she says.

Buthelezi is also a mentor in her own right. A member of a number of women's and business groups, she is a tireless campaigner for women in business and believes that she has something to give back to other women.

"It is important for young African women to believe that they can have all they want. Not some of it - but all: a satisfying and meaningful career, professional goals, friends, family and a supportive relationship."

And if sharing her own experiences can help convince women of this, then all the better.

"I have faced many challenges that a young, African woman can ever face, been to hell and back, and faced many disappointments. But after all those hardships and challenges, I never gave up on my career goals, my personal goals, or the broader goals of this lovely African continent!" she says.

The film is due to be aired later this year on ABC and other Africa channels internationally.