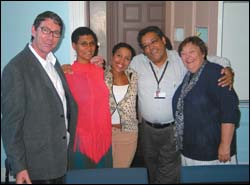 Bruinders completed an honours degree at UCT in 1995 when she was first introduced to ethnomusicology. The field of study was to prove pivotal. She completed her master's degree at Wesleyan University in Middleton, Connecticut, her thesis investigating informal musical instruction in Cape Town community structures. The institution provided rich pickings, with a renowned world music programme. Bruinders soon found herself immersed; she studied West African drumming with Abraham Adzenyah, a master drummer from Ghana, as well as Brazilian samba, Caribbean steel bands, the kora and jazz percussion. After completing this degree in 1999, she headed for the University of Illinois for a doctorate in ethnomusicology. Eight months ago Bruinders returned to the Western Cape to teach and to pursue her doctoral studies. At the SACM, her speciality is African music, particularly diasporic music, at an undergraduate level as well as musical ethnography and ethnomusicological theory and method at postgraduate level.

A musicologist and specialist in music theory, Feenstra is steeped in experience. At the tender age of 23 she took a teaching post at Unisa, augmented later by stints at Wits and Pretoria. A move to Harrismith in the Free State cut short her teaching. But Feenstra kept her hand in by working with music inspectors from the former homelands. But even more challenges lay ahead when, after 1994, there were plans to remove music as a school subject. Feenstra initiated the National Union of Music Educators, fighting "tooth and nail" to stabilise the situation in Gauteng. She now serves on the executive committee for the music and sport arm of the national standards body, SAQA, created to establish standards for music teaching nationally. Feenstra is also involved in writing the new 2005 music curriculum, which will move from the "Royal Schools of Music exam approach" to a broader exposure to music and music styles, affording more recognition to indigenous styles and jazz influences. Of her new job at the SACM, she says: "A student must be given what they need: tools for research and performance. Our courses must be geared to that."

Born in District Six and bred in Manenberg, Hartman is an internationally acclaimed performer on the world's stages and his appointment has been a coup for the SACM. "It's been hard to change from an opera singer to an associate professor," he quips. But it is a task he is more than ready to tackle, eager to contribute to his students' knowledge and vocal skills, and keen to add new elements to the college, one that has come some way since he graduated in 1980. Over 20 years after making his professional lead debut, be believes he has an important contribution to make. "I feel I have a lot to share after an international career." It is the latter that has honed his sense of what students actually need from the SACM. South African students, be believes, are largely spoon-fed. "We must create better musical foundations, ones that prepares students adequately." Though admiring of the college's collective wisdom and experience, he believes the life of a music school is also in its new blood. "I'm looking forward to a period of change and growth at the college," he concludes.

Bruinders and Nixon's brief is to strengthen the college's ethnomusicology and African music programme. After studying at the University of Madras, India, Nixon completed his master's degree in ethnomusicology at the Wesleyan University in Connecticut. His PhD, begun at the University of Washington in Seattle, is still a work in progress. He later moved from an Asian to an African music focus in order to be a rounded resource in South Africa. Nixon taught at the former Universities of Natal and Durban-Westville. At UCT, he has charge of the Kirby Collection, which he describes as an " onerous but exciting challenge". The collection is a natural treasure of indigenous as well as Asian and European instruments. Earlier this year the university received R2.2-million from the National Lotteries to restore and rehouse this 600-piece collection. His task is to take care of the collection, as both curator and designer of its exhibition. "The work will involve postgraduate students so that it becomes and exciting national research resource," he adds.

Scholtz, an Old Mutual Jazz Encounters vocalist of the year in 2001 is passionate about her craft. "Music is soul food," she says. It is this approach, favouring discipline and hard work, that she hopes to bring to her teaching at the SACM. Having performed with the likes of American jazz legend Al Jareau and recording with South African artists like Jimmy Dludlu, she is also well-versed in the vagaries of the local music scene, valuable experience she will tap in her teaching. Scholtz is also keen to open up the repertoire available to students, whether they prefer jazz, blues or pop. "The problem at UCT is that there has been nothing in between opera and jazz in the past." Scholtz studied opera at UCT, graduating in 2000. Currently at work on a postgraduate degree in classical music, she believes a classical training is the foundation for all singing styles. She aims to use her strengths in presentation and stagecraft to polish her students. "I want to add a vital acting element to the jazz course."