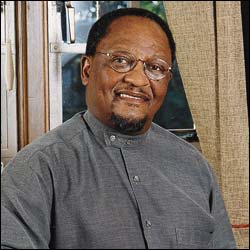 The UCT Council has unanimously confirmed an extension of vice-chancellor Professor Njabulo Ndebele's appointment to June 30, 2008.

This decision was made during last week's Council meeting at which it was agreed to extend Ndebele's term for a further three years, after his current five-year term expires next year.

In publicising the decision, Council chair Tony Farr said this had followed comprehensive consultation within the university community, culminating in an overwhelming vote of support by the Senate.

"I am sure that you will all join me in congratulating the vice-chancellor in the knowledge that the university will be in good hands in the years ahead," he said.

The decision to extend the contract comes after a lengthy consultation process to determine whether the VC enjoys sufficient support in the university. Any decision to grant a renewal or extension of office requires a two thirds majority of the members of Council present and voting.

Ndebele began his term of office at UCT in July 2000, following tenure as Resident Scholar at the Ford Foundation's headquarters in New York. He joined the foundation in September 1998, immediately after a five-year term of office as vice-chancellor and principal of the University of the North in Sovenga, Northern Province.

An established author, Ndebele's most recently published a novel, The Cry of Winnie Mandela, has earned critical acclaim. An earlier publication, Fools and Other Stories, won the Noma Award, Africa's highest literary award for the best book published in Africa in 1984.

Ndebele served as president of the Congress of South African Writers for many years. As a public figure he is known for his incisive insights in commentaries on a range of public issues in South Africa. He also holds honorary doctorates in literature from the University of Natal (Durban), the Vrije Universiteit (the Netherlands), and Soka University (Japan), and in humane arts from the Chicago State University.