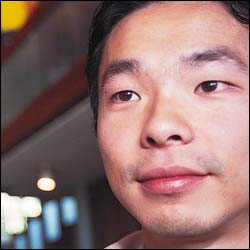 The young and the elected: Political newbie Yi-Ju Wang, all of 27-years old, is one of the ID's seven new MPs.

Even among the many hallowed newcomers in the country's recently reshuffled political landscape, Yi-Ju Wang stands out in the crowd.

For one thing, at 27, the information systems master's student (known as "Chris" on campus), is now one the country's two youngest members of parliament. And, as far as we can tell, he will be the only MP of Chinese birth to soon serve in the national assembly (he moved from Taiwan to Cape Town with his parents and brother in 1991).

And if that's not enough to make Wang catch the eye, then there's also the distinction of being one of only seven MPs representing the country's most successful Johnny-come-lately, Patricia de Lille's Independent Democrats (ID).

But if Wang is a new kid on the political block, then he's also an old hand at doing the kind of things that first made him grab De Lille's attention - helping others. Ever since high school, Wang has been involved in some kind of outreach work, be it feeding the destitute, helping out at children's hospitals, or signing up with aid organisations such as those involved in last year's post-floods relief work in Cape Town.

He, along with his parents, has also been very active in the local Chinese community, which he estimates to be about 500- to 600-families strong (there are some 13 religious, charity and other organisations involved with these expatriates).

"I just like to help people and see their faces," he says. "I can't describe the feeling that comes with helping others."

It was while doing some more non-paying work last year, setting up an electronic database for the ID, that party leader De Lille took Wang aside and over a heart-to-heart convinced him that politics may be a natural outlet for his altruistic impulses. He was attracted to the party's focus on the environment - he learned something about the issue while serving as a volunteer guide at the V&A aquarium - as well as its emphasis on helping the poor and the unemployed, and its aim to highlight the plight of those with HIV/AIDS.

De Lille also intimated her interest in making some inroads into the politically-shy Chinese communities around the country, a cause, understandably, near and dear to Wang (especially as South Africa is beginning to make overtures to Chinese hoping to settle in South Africa).

Alas, Wang's budding political career means that he will have to put off work on his master's thesis again - there've been one or two previous delays - while he cuts his political teeth. He's currently caught up in near-daily ID meetings with straight-shooting De Lille - "She doesn't waste time waffling" - and other members as they ready themselves for the year's governmental agenda. Wang is likely to sit on both finance and home affairs committees, so expects to be kept on his toes for the next few months and years.

And although this is his first real encounter with politics, he's relishing the opportunity. "As with my charity work, I really want to help people, and working with the ID gives me more leverage to do so," he says.

"There are things I can do by myself, but now, in a sense, I have a whole party behind me. And as a party, you can do more than you can as an individual."