Bioterrorists could be targeting US elections 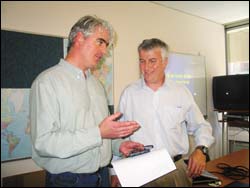 With arsenals of some of the world's most noxious substances and a mission to kill, it is only a matter of time before some group launches a biological terror attack, UCLA's Prof Peter Katona said at a public lecture at UCT last week.

"I think they [terrorists] are biding their time, waiting for the right opportunity. I think that will be the American elections."

Katona is assistant professor of clinical medicine (infectious diseases) at the department of medicine at the University of California Los Angeles.

In a truncated presentation of his lecture Biological Terrorism: Threat and Response, tailored to the lunch-time slot, Katona provided a sweeping view of bioterrorism, going back to its roots thousands of years ago when combatants first learnt they could throw diseased bodies over their enemies' ramparts, sowing even greater destruction than their conventional weapons allowed.

"The potential now is to use these agents on a very large scale," Katona added. "Some groups have no fear of repercussions. The terror factor is the lack of restraint among terrorist groups, fueled by their religious and cultural fervour."

Biological warfare - and other unconventions forms - were being spawned by an unholy combination: the gathering religious nexus, the development of rogue states and transnational organised crime. "People also travel more. The world is interconnected. There is global food production. It makes it seductively easy for terrorist groups."

Though capable of generating massive destruction and disruptions, biological weapons were still difficult to deploy. "While terrorist groups have military expertise and are knowledgeable about the composition and manufacture of biological weapons, that they don't yet have the capacity to weaponise biological agents. This acts as a deterrent. They are difficult to control and messy."

However, biological weapons are cheap and undetectable by the five senses. "They can be easily released in confined spaces, at football matches, concerts and gatherings. Consider that it would cost in the region of US$10 000 per death for nuclear weapons compared with US$1 to US$10 per death by biological means."

Katona estimates that it cost about US$350 000 to bring down the Twin Towers. But the economic cost of that carnage is estimated at a crippling US$100-billion."

There was also no doubt, he added, that 9/11 had spawned a new era of terrorism, although there had been smaller warning signs of things to come: the sarin gas attack by the Aum Shinrikyo cult in Japan, the disappearance of nuclear weapons following the dissolution of the Soviet Union, the defection of Dr Kanatjan (Ken) Alibek to the US in 1992, spilling the beans on the USSR's biological weapons development programme.

To end, Katona presented a more sobering perspective. "In the 20th century, 100 million people died as a result, directly or indirectly, of war, while 300 million died of smallpox."