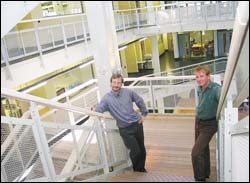 At its meeting in March 2002, UCT's Council approved plans for a new chemical engineering facility that would feature world-class teaching facilities, offer state-of-the-art research laboratories and conform to current and future safety standards.

Now, nearly two years later, the drone of heavy machinery will be heard no more at the northern end of the Snape laboratories. After clocking up a whopping 475 000 man hours, progress on the new building has reached practical completion.

With the relocation of the department's academic populace and laboratories having taken place between mid-November and mid-December 2003, the only work remaining is the reticulation of gas to the laboratories on level four of the edifice.

Responsible for the mammoth task of planning and managing the move was senior lecturer Dr Dave Deglon, who believes it went off without a hitch due to good planning and co-operation from staff.

"The move was a very stressful event at the end of a long year for us. Many of the people involved in the move were also heavily involved in the design of the new building during 2002 and 2003 - in addition to their normal jobs. Staff had to move at a time when they were already very stretched and tired, but they handled it extremely well."

Besides the transferral of the hoi polloi, Deglon had to contend with the transportation of laboratory equipment and chemicals (being the chemical engineering department).

Sensitive and expensive laboratory equipment was placed in specially built wooden crates, glassware and smaller, fragile items were packed into boxes and the help of specialist removal companies was enlisted.

"Chemicals were put into metal drums, which were packed full of vermiculite, an absorbent material, in case of spillage," Deglon explained. "Fortunately, there were no major incidents, though we did lose a few items of glassware."

With the move now out of the way, it is the task of all concerned to settle in and get comfortable in their new surroundings.

"There are a few areas in the building which are being finished and we are still in the process of hanging up noticeboards, putting names on offices and sorting out locks. But generally staff are back in the 'business as usual' mode," he added.

For senior lecturer Martin Harris the move to the new building signifies the fulfilment of a project that has been on the department's agenda in one form or another for 25 years.

"This is a wonderful building and I think the team involved has done an outstanding job of capturing the vision of a structure as both a 'family' home and a facility consistent with our goal of being a world-class teaching and research department."

Expecting their annual intake to grow by five percent, the department estimates that their student body will comprise 450 undergraduates and 130 postgraduates by 2014.

Despite continuous building modifications, this student growth, coupled with a substantial increase in the volume of industrial research, placed heavy demands on an outdated facility, built in 1969 to house only six academics, 12 postgraduates and an annual intake of 30 undergraduates.

"We were in urgent need of facilities that met our present requirements and which equipped us to meet the challenges of the future," explained head of department Professor Eric van Steen. "Continuous adaptation of the existing building was no longer practical and a bigger facility was needed if we were to continue to maintain our reputation as arguably the leading chemical engineering research institution in Africa."

In their design, Derick Henstra and Peter Fehrsen of dhk Architects, in association with Joshua and Joshua Architects, integrated offices, laboratories and teaching and research areas to promote interaction across all disciplines and lines of activity.

At the heart of the design is an atrium extending the full height of the building. Infused with natural light, the atrium carries vertical movement across six levels and serves to connect the various facilities throughout the building.

Located partway up the building and fully embracing the atrium volume, an open common space serves to promote casual, collegial interaction in the department and across the broader university community.

According to Van Steen, the department's existing emphasis on experiential learning will be fomented by the use of the building and its utilities as teaching tools.

"Through the creative use of suitable instrumentation, utilities such as air conditioning, electrical distribution and plumbing, as well as elevators and structural elements, are made accessible for observation, enabling students to determine, for example, the influence of load on the power consumption of the elevator or the performance of the air conditioning system.

"The building will, therefore, be exploited to demonstrate the principles of chemical, civil, electrical, mechanical and general engineering in daily operation," he added.

In keeping with modern practice, the principle of sustainability has been applied throughout the design process where possible. Van Steen noted, for example, that consideration had been given to the reuse of demolition rubble, the use of environmentally benign building material, natural drafting and thermal glazing.

In addition, flexible design will make laboratories easy and inexpensive to reconfigure to meet the department's changing needs. The building also provides full access to people with disabilities.

"We are proud of the department's transformation process that has led to a student body comprising candidates from more than 17 countries and speaking over 22 different languages," said Van Steen.

"The increasing internationalisation of our student body is primarily due to our ability to offer students an opportunity to study at an internationally accredited department with involvement in research projects aimed at developing Africa's abundant potential."

Currently, the department's undergraduate student profile is 75% black and black African students make up some two-thirds of the graduating class. Women graduate numbers have more than doubled in the past decade and at present one-third of the department's master's and doctoral candidates are women.

The opening function for the new building is set for April 2, 2004.