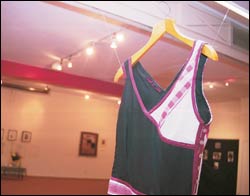 Dressed for SA: Maid to Order, a piece by Kerryn Greenberg.

A handful of African studies graduands were among the 14 or so honours and master's students who smithed theory into art for a course on collection and exhibition, offered by the Centre for African Studies (CAS).

An annual feature of the CAS calendar, students are expected to translate ideas and tenets they had kicked around in their elective on Collection, Representation, Display: Constructing Africa through its Material Culture into a showcase exhibition. These students are joined in their endeavours by peers on other CAS programmes (such as Images of Africa), as well as the centre's regular semester-abroad recruits (this year, mostly American).

The elective - offered on the Public Culture in Africa programme - has two aims, explained CAS' Dr Nick Shepherd, who convenes the course with colleague NoÃ«leen Murray.

"On the one hand, it examines in a theoretical and critical manner some of the debates in the field of public culture," said Shepherd. "And on the other hand, we aim to impart a set of quite practical skills around designing and producing a public exhibit."

Among those to have work on display was star student Kerryn Greenberg, who not only snagged the class medal for the elective, but also graduates with distinction this week. Greenberg had worked in the arts and museum sector for some time before returning to UCT to do her honours in social anthropology this year.