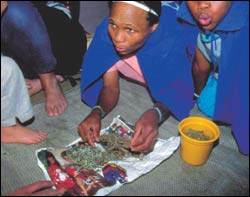 Fat of the land: It is hoped that a wide variety of healing traditions and indigenous plant material will contribute towards the development of novel medicines to treat tuberculosis, malaria and other diseases of the developing world. (Photo Dr Neil Crouch, National Botanical Institute.)

An Innovation Fund grant of R18-m from the Department of Science and Technology has provided a consortium of 135 scientists from ten institutions with a springboard to develop novel medicines, using indigenous plants and knowledge.

The grant will be spread over the project's three-year lifespan. Although the amount is half of what this national research and development platform will need, it will galvanise research into potentially ground-breaking discoveries to advance new drugs for treating tuberculosis, malaria, diabetes mellitus, immune modulators and tonics.

Much has been written about the use of indigenous plants, a potentially rich source of complex chemical compounds, in novel drug development but project director and principal scientist, UCT's Professor Peter Folb, was cautious about results.

"We don't promise 'earth-shattering' discoveries or a miracle cure. It takes years to develop a novel drug from concept to customer, ready for the world. Our task is to investigate five to seven promising compounds identified from indigenous plants, compounds that can be fully investigated in future developments. We hope to come up with these promising leads during the next three years. The idea is that we will eventually have novel drugs that will reduce costs and treatment period."

While innovation will be at the core of the consortium's work, there are two other major national imperatives alongside: developing local plant knowledge and building the young South African science community in what Folb describes as "a process committed to attracting and promoting young scientists, especially those who come from those communities where traditional medicines are used".

The consortium's work is set against declining research productivity in the pharmaceutical industry, with fewer new medicines being released than in the past. According to Folb, the last novel TB drug was developed 30 years ago. "The rest have been derivatives and there is a growing need for innovation, for new therapeutic lead compounds."

Presently, the chemical diversity available to pharmaceutical companies comes from two main sources: combinatorial or man-made components for high throughput screening (but which have limited structural diversity); and natural products that provide a wealth of small molecules with drug-like properties and with "enormous" structural diversity.

"Seventy per cent of South Africans turn to traditional healers for their first line of healing. We share that respect. There are many benefits to be gained between orthodox, Western-driven ways of practicing medicine and traditional ways, indigenous to this country and based on our flora in particular."

Folb, who heads UCT's pharmacology division, home of the Medical Research Council's South African Traditional Medicines Research Unit, says there is a vast resource of biodiversity that has not yet been tested for useful pharmacological activity.

"Many of the plants that will be investigated are indigenous to southern Africa, providing opportunities for discovery that are not available elsewhere," he noted. The 24 000 southern African terrestrial plants, of which 4 000 have medicinal significance, and the diverse marine plant flora, of which little medicinal application is known, have the potential to expand significantly the search for novel anti-disease compounds.

"Even with higher plants, which probably represent the most thoroughly examined source, it is estimated that less than 10% of the world's species have been tested for biological activity. Of the 20 best selling non-protein drugs in 1999, nine were either derived from or developed as a result of leads generated from natural products."

Each of the clinical and scientific specialists in the consortium will collaborate to identify plants with the highest potential to combat the diseases.

Beyond the consortium's goals are important potential spin-offs: revenues from the transfer of novel technology; creation of agro-processing opportunities in South Africa; patents on novel plant-derived compounds; and the establishment of the country as an international factor in the development of plant-derived medicines.

The scientific community stands to benefit from the availability of highly effective, standard and validated fractionation methods and a database and herbarium related to medicinal plants.

But they are being careful about it. "We don't want to pass on intellectual knowledge and potential rights and benefits of this to a business partner who wouldn't have contributed to this development. We're sitting on considerable intellectual property that we share with others who have a right to it."

Besides the focus on discovery and innovation and research capacity development, is community development. "Indigenous communities will be represented on the board of trustees. Should the team be successful in producing new compounds for fighting TB, malaria or diabetes mellitus, or other diseases, financial arrangement would be reached with the communities that would ensure that they share equally in the material as well as the scientific benefits," Folb explained.

The consortium will also provide an infrastructure for other research groups engaged in similar initiatives, one that is inclusive, supportive and developmental. "We've won this award to set up a collaborative platform for conducting this kind of research in South Africa and hope in due course to include other diseases that have been neglected in Africa, including trypanosomiasis (sleeping sickness) and leishmaniasis, many of which have developed drug resistance."

Fortunately, the scope of the project is not restricted to the funding cycle. "This is an important project for South Africa for the next 10 to 20 years and the infrastructure and technologies we set up now will act as a valuable platform for furthering the research."

The project will be managed by UCT alumnus Dr Niresh Bhagwandin (PhD in biomedical engineering) of the South African Medical Research Council, who has a broad knowledge of health and research issues, with valuable experience as part of a similar anti-malarial medicines development consortium.

(The consortium also includes the Agricultural Research Council, the Medical Research Council, the Universities of Natal, Pretoria, RAU, Port Elizabeth and the North, the National Botanical Institute and the Council for Scientific and Industrial Research [CSIR]. From a UCT perspective, the project taps into four other departments besides pharmacology: chemistry, medical microbiology, immunology, and surgery.)