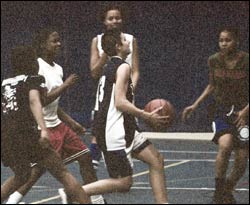 Basketball aficionados eager to pouch some spending money turned out in their numbers to dribble, charge and block their way through the first Standard Bank 3-on-3 Basketball Tournament, hosted at UCT on Friday, August 29.

In the women's event, the UCT side (only three of the squad's players, of course) bagged the R200 purse by beating Charlie's Angels 12-9 in the final.

The men's final was a closely contested one, Sesuja (aka Red Devils) just getting the upper hand over Monsters Inc (players from the UCT men's side) to win 11-10.

The tournament was not just a team event, but also featured a three-point shootout and a slam-dunk challenge. Farai Chizana earned himself R75 in the former, landing six baskets in just under 45 seconds.

Adjudicators then voted John Mumba's slam-dunking the most aesthetically pleasing, and awarded him the contest's R75 prize money.