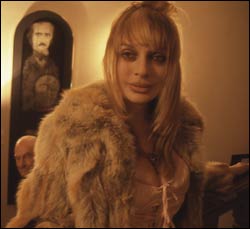 Four works by Hungarian-born painter Eris Silke have been presented to the South African College of Music (SACM), courtesy of a long loan by a private collector.

Silke, who studied at UCT in the early 1970s, was at the recent "unveiling" of the paintings at the SACM, hosted by Michael Tuffin, acting director of the SACM.

The loan of Silke's works was negotiated by UCT's Works of Art Committee, who felt that their style and subject matter would blend in well with the ambient surrounds of the SACM. Three of the paintings are on view in the SACM foyer, while the fourth was placed in Tuffin's studio.

According to Irma Stern Museum's assistant curator, Mary van Blommestein, Silke's work is inspired both by private metaphor and literary allusion, including the poetry of Edgar Allan Poe and Federico Garcia Lorca, as well as the fairy tales of the Brothers Grimm. "Generally working in acrylic and mixed media on wood, the intricate detail of her compositions is finely crafted, inviting the viewer to engage in a close inspection of the multi layers of meaning," said Van Blommestein.