Sporting As for rugby's new darlings 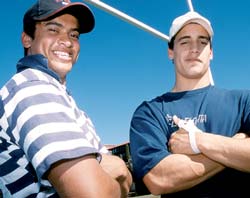 Stars of the future: Isma-eel Dollie (left) and Paul Delport have become caught up in a whirl of media activity following their parts in helping the SA under-19 rugby side win the world championships.

With the rest of South African rugby mired in the doldrums, it's not hard to understand why the national under-19 side's triumph at the World Championships in France recently had the media waxing lyrical.

At the heart of the deserved hullabaloo that greeted the squad's return to local shores were two UCT first-year BA (Law) students - scrumhalf Paul Delport, who skippered the team and opened the SA scoring with an eighth-minute try in the final, and flyhalf Isma-eel Dollie who calmly put over a drop goal in the 34th minute to ensure the side a 22-18 victory over New Zealand. The diminutive (physically, at least) duo's exploits in the tournament have since turned them into national heroes, and weeks after the event, classmates and strangers still come up to them to extend their congratulations.

"Our coach warned us our lives wouldn't be the same again," noted Delport, who is currently nursing a broken thumb he incurred in the final. Dollie, in turn, has taken the adulation, and the advances from the opposite sex, in his stride - "It's all part of the game," he observed fatalistically.

(It must be noted, however, that his topless photo shoot for You magazine did cause a few nervous flutters in his home, and still reduces Delport to mocking laughter. "They just told me to take my top off," he commented.)

Having played rugby together for much of their time at SACS, the 18-year olds know each other "like the back of our hands", according to Dollie. This partnership came in handy when they had to attract the selectors' attentions during the pre-championship trials that featured no fewer than 90 young rugby players.

"Luckily enough, we always played together in the trials and we were roommates as well," Delport said. As halfback pair for the SA side, they also combined well in the championships, as their heroics testify. Dollie, for instance, was named man of the match in the Paris semi-final against France, where they had to contend with the cheers of 15 000 ardent Gallic fans.

"Playing against France in Paris in front of 15 000 people supporting the French is quite a thing to overcome," Delport said of this match.

With the local boys out for the event's finale, however, the French opted to lend their vocal support to the SA side. "They like the underdogs," Dollie explained.

Delport still finds it hard to suppress his excitement about scoring a try in the final, where he had to sneak his way through the Kiwi defences after a scrum near the New Zealand goal line. "It's the kind of thing you dream about when you're lying in bed the night before a game.

"I couldn't believe these okes just opening up a gap in front of me. I thought the ref had blown his whistle or something."

Of his "Stransky moment", Dollie is equally modest. "I just wanted to get the ball out and waste some time," he said.

A drop-kicker of some renown, the three-pointer did, however, help to exorcise a demon he'd been carrying around since his last school game, when he missed a sitter from right in front of the poles, he confided.

With the media attention tapering off for the moment, the two can now concentrate on getting into the UCT and Western Province sides, and catching up with their studies. Although not consummate students (self-confessed), both are enjoying the university experience.

"I still don't know what I want to do," said Delport to Dollie's validating nod, "but it was a choice between sitting at home or coming here to study a BA Rugby - so I decided to come here. And [glancing at his teammate] we're still having a jol."