A picture of Utopia 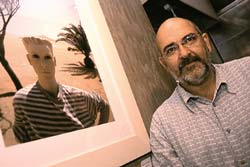 Picture that: Geoff Grundlingh with one of the works in his Utopia exhibition.

UCT photographer Geoff Grundlingh explores, among many other things, the question of identity in his Utopia exhibition currently on at the Ivory Room in Cape Town, a show that forms part of the Vision photography festival of the Cape Town Arts Festival.

Grundlingh, who also heads the South African Centre of Photography at Hiddingh Campus, was approached by organisers Associated Visual Arts (AVA) and Bell-Roberts Gallery to put together an exhibition for the Festival.

With no time to compile a new show, he opted to return to a portfolio he had put together for last year's Month of Photography, one he thought best suited to the Ivory Room, an upmarket nightclub in Loop Street.

For Utopia, aka "Figures in a Desert Landscape", Grundlingh had toted three, almost Aryan-looking â€œteenageâ€ mannequins along on a trip to Swakopmund, shooting them at different locales around the Namibian town.

â€œI wanted to get a very uncomfortable sense between the figures and the mostly barren land, the sense that they don't quite belong,â€ he commented about the work.

As to the show's meaning, Grundlingh prefers to keep his options open. â€œIt could be just about three dummies standing in the desert or on a street corner,â€ he said tongue in cheek.