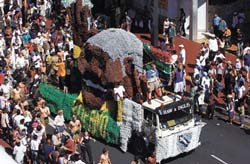 MORE than 1 000 students and performers, garbed in outfits ranging from the psychedelic to the just silly, took to the streets of Cape Town again last week as part of UCT Rag's (Remember and Give) annual floats procession.

As happens every year, students – mostly painted or nappied – aboard and beside the floats go around with collecting tins, soliciting small change, or notes, from Cape Town's curious pedestrians.

These funds, which amount to anything between R5 000 and R12 000 (this year's collection is still to be tallied), are then passed on by Rag to the Students' Health and Welfare Centres Organisation (SHAWCO).

This year, 11 floats – as colourful and resplendent as its entourage – took part in the pageant, eight belonging to UCT residences while the other three were the usual contributions from SHAWCO, the Rag office and a group of engineering students. The supporting cast included the UCT Army Band and the Cape minstrels.

As with Rag's Sax Appeal project, the actual floats procession is the final payoff to months of preparation. Project managers Brandon Trew and Neil Venter were responsible for making sure the procession came off, which involved getting materials to the residences, assisting with designs, haranguing students into sticking to their deadlines and organising the party that preceded the actual event.

â€œAt one stage, it did not look like the floats were going to be built in time,â€ confided Trew. â€œBut on the last night, everybody kind of came together and they got the floats built.â€

Constructing the floats is not just a time-consuming process, but also, depending on its size and composition, an expensive one, noted Trew. Kopano's octopus float, the largest at last year's event, set the students back about R11 000.

Most groups managed to secure some kind of funding to help foot the bills. In addition to Pick 'n Pay's R40 000 sponsorship to the Rag Office, Hunter's (they of the popular ciders) supported Kopano and Baxter residences, Butler's Pizza aided the engineering group, while Pick 'n Pay also chipped in for SHAWCO's float.

Sadly, support from Cape Town's residents has been declining over the years, adds Trew. And most of the cash coming in does so in the form of very small change (one- and two-cent coins are the most common currency in the tins).

â€œBut the main point of the procession is about Rag's public face,â€ observed Trew. â€œSo we're quite prepared to run it at a loss.