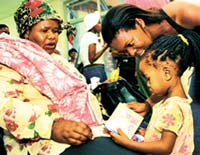 Many languages one country: PRAESA's Xolisa Guzula (right) hands a set of books to six-year-old Kayleen Ghazu, who was one of several children at the Red Cross Children's Hospital to receive copies.

LANGUAGE specialists from the UCT affiliated Project for the Study of Alternative Education in South Africa (PRAESA) did their bit for the Western Cape Language Committee's second annual Multilingualism Awareness Week by distributing sets of small, colourful books to mothers and children at Red Cross Hospital.

The theme of the Week was, SÃª dit in jou taal - Yitsho ngolwimi lwakho - Say it in your language.

The books were distributed in sets of three, each set consisting of identical books in Afrikaans, Xhosa and English. The books, which are a series of eight titles, cover basic themes that preschool children can identify with and pick up quickly.

According to Peter PlÃ¼ddemann, language specialist at PRAESA, the books were written for caregivers to read to their children.

â€œWe are trying to foster a culture of reading, by attempting to make reading a valued activity, so that it becomes part of the household and is done for pleasure,â€ he explains.

PlÃ¼ddemann says the idea behind distributing the books in sets featuring each of the Western Cape's official languages, was to encourage parents to teach their children other languages.

â€œ We aim to create awareness around the three official languages of the Western Cape and to promote some sort of a reading culture because people in this country do not read very much,â€ he elaborates.

The books are published by the Early Literacy unit of PRAESA and are funded by the Royal Netherlands Embassy and the Volkswagen Foundation.

PRAESA's Xolisa Guzula, says that the project was initiated because of the shortage of children's literature written in indigenous languages in South Africa.

Multilingualism Awareness Week is endorsed by the Red Cross Hospital, which employs two interpreters to assist medical staff to communicate with patients in their mother tongues.